And now our top stories... 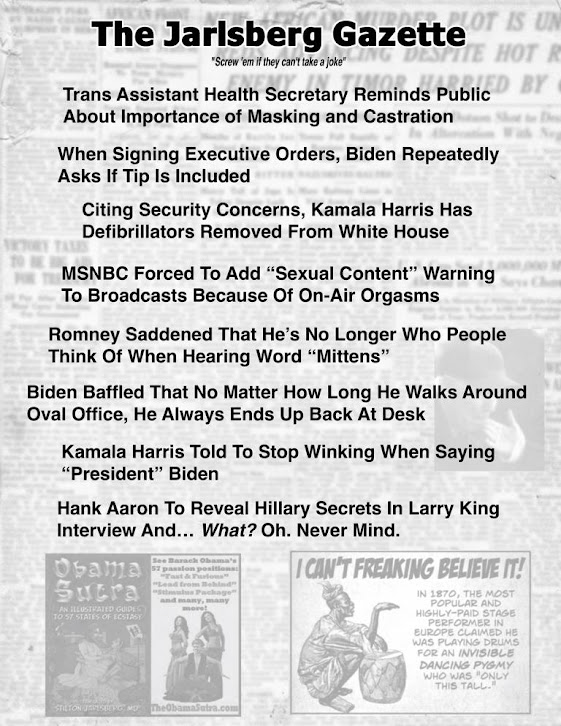 FROM THE VAULT
As the saying goes, "what's old is nude again." Or at least that's our take on Joe Biden's executive ordure which will force all female athletic competitions and programs to include males who identify as females. And if no biological female ever again gets a college sports scholarship, wins an athletic competition, or lands an Olympic slot, well, tough titty. In this case, literally. Points we thought we had made clear way back in 2015...
SONNY WITH A CHANCE OF SHOWERS (11/6/15)

Quietly weeping mourners braved dark clouds and chill winds yesterday to attend the graveside services for Common Sense, which finally passed away this week after a long, painful, and ultimately hopeless battle with Liberalism.The final blow was thought to be the Department of Education's ruling that a transgendered student who self-identifies as female but was born male and still has male genitalia, must be allowed to shower with the girls on the school soccer team.To the school's credit, they had previously done everything possible to accommodate "the girl with something extra," including providing a privacy curtain for shower time. But that still wasn't acceptable to the student - who is apparently either an asshole or a bitch, depending on whether you believe gender is genetic or simply a choice.Which is why the Department of Education conducted a taxpayer-funded two-year investigation into what should be done (and the Dems are whining about the length of the Benghazi hearings?!) before determining that the student was being discriminated against "on the basis of sex." Because, no doubt, they didn't want to say "on the basis of having a skin flute.""All students deserve the opportunity to participate equally in school programs and activities - this is a basic civil right," said Assistant US Secretary Catherine Lhamon, adding "including showering with nubile young athletic women, their skin delightfully flushed from their exertions, and watching the sinuous streams of water course sensuously over their firm young breasts before racing down, down, down to disappear into the heady tangled forests surrounding their teammates' forbidden love grottos."Okay, she didn't say that last part word for word, but we're pretty sure it was implied.Hope n' Change isn't against reasonable accommodation of transgendered people, but that word "reasonable" needs to be emphasized. With a Louisville Slugger, if necessary. Which should also be the case when dealing with other ludicrously clear cases in which "self-identifying" doesn't make something true. And we don't just mean Rachel Dolezal's "blackness," Elizabeth Warren's claim to be "Native American," little Ahmed's timed detonator that identifies as a "clock," or B. Hussein's transparently ridiculous assertion that he self-identifies as a Christian.For instance, a 12-year-old who "identifies" as an adult shouldn't get to buy booze. A 25-year-old who "identifies" as a senior citizen shouldn't be able to collect Social Security payments.  An 11-year-old girl who "identifies" as a grown woman shouldn't be able to be a consensual sex partner for a pedophile. Yet in our society, it seems increasingly likely that any and all of these things could come to pass.If Common Sense was still with us, we think it would present us with an elegantly simple solution to the problems above: the requirement of a "No Dicks" sign outside girls shower rooms, and perhaps an identical one to tell the dicks in Washington to start solving problems instead of inventing them.
Stilton Jarlsberg at 12:00 AM
Share