What was I saying? I don't remember but I'm pretty sure it must have been something about the Chinese balloon which drifted slowly across our nation for days and days, allegedly doing something or other, before Joe Biden gave the order to "shoot it out of the skies as soon as it finishes its mission."

To help show the gravity of the situation, a terse news media described the balloon as being "as big as two school buses" which is certainly a useful metric for those who like to measure spherical objects with school buses. For the rest of us, it might have been simpler to report that the balloon was "70 feet across" and had enough volume to completely fill three or four news cycles.

Clarification: On Facebook, a number of people remarked that they had no idea what the cartoon above was supposed to be. For such poor souls, I'll explain that it's a reference to the wonderful TV series "The Prisoner" in which a former spy is held captive in a mysterious holiday village by parties unknown. Escape is impossible because when a prisoner appears to be fleeing, he's tracked down by a seemingly living balloon that suffocates him into unconsciousness. The show was created by its star, the always-wonderful Patrick McGoohan and is definitely worth checking out.

ALSO IN THE NON-NEWS

• The ice storm in North Texas has passed which is great news for those of us who have reached hip-breaking age.  And I'm pleased to report that the many plants and flowers that had just started pushing up out of the soil in January look like they've survived the cold weather without too much damage.

• Last week I discovered that the IRS had rejected my tax return only days after I submitted it electronically, owing to a top-secret identity PIN number for Daughter J that they said I got wrong. But showing themselves to be good sports, the IRS didn't make a big deal out of it by notifying me and, undoubtedly for my convenience, just held on to the $36,000 tax refund they owed me.

Rectifying this required a phone conversation with the IRS in which I was told that I would have to resubmit my taxes (and possibly face a late filing penalty, even though they're the ones who owed ME money). I asked if I needed to get a new PIN number for Daughter J and it was explained to me that I could only submit my return by mail at this point, so no PIN number was needed!

So with any luck, I'll be receiving most of my tax refund from last year at about the same time I have to file this year's taxes.

I sure wish I could plug something funny or colorful in here, but I'm afraid it's just not happening today. Saturday is my wedding anniversary and I think I could cope with that okay. But it's also a new anniversary that is a lot harder for me to deal with.

When Kathy and I were in the hospital last year at this time, there was a big whiteboard in her hospital room that listed the many different kinds of chemotherapy she was getting, and a series of boxes to show how many doses she'd received and how many were left to go.

Eventually, it came down to one last dose of one last drug - but the nurse forgot to check the box. Kathy instructed me to pick up the marker and fill in that last "X," which I did.

"That was my anniversary present to you," said Kathy - for indeed, it was our anniversary. "I did this round of chemo for you, and that's the last of it."

We had agreed that this would be the case. She'd had more chemo than she ever wanted and she'd done it for me. So the only thing left was to wait to see the results. Two weeks of waiting followed by a painful bone marrow test.

That test showed that Kathy was almost, almost in remission. No cancer cells could be detected by the human eye...but more sensitive computer sensors found a tiny amount of cancer still lingering. Which started another two week wait as prelude to another test. Would the chemo still in her body kill off those last cancer cells?

We waited- me with hope, Kathy without. And again she had the bone marrow test and we awaited results. Results that were eventually given to us by a soulless automaton of a doctor's assistant: the cancer had again exploded out of control. And that was that. There was nothing more to do.

The next day we were in "hospice" at another facility. Actually, just a standard room in the Alzheimer's wing of a nursing home, staffed by people who couldn't speak English. Kathy received no medicine or treatment of any kind. And together we waited.

And so this anniversary - the first anniversary of Kathy's exquisite and painful final gift - is going to be a rough one for me.

And I'm embarrassed to be inflicting this on you good folks, but you are my friends and I could use a virtual hug or two.

I love you and miss you, Kathy.

Apparently, yet more classified documents entrusted to Joe Biden have turned up in a fifth unsecured location, leading Department of Justice officials to broaden their document search to include "everywhere that a**hole has ever been."

Of course, the real story here isn't that Joe Biden sucks at taking care of critical intelligence documents. Rather, the story is why the DOJ and Biden's own lawyers are pro-actively combing every piece of paper in his possession in the first place?

There are some (and by "some" I mean me and anyone else who isn't a blithering idiot) who believe this is a desperate attempt to find and destroy evidence of Joe's long history of corrupt deals, bribe-taking, influence peddling, and money laundering  before the Republican congress can finally start pursuing the myriad criminal leads in Hunter Biden's infamous laptop.

Although even as bad as things look at the moment, Biden is not completely without defenders...

BONUS: CHATBOT COMEDY FROM THE FUTURE 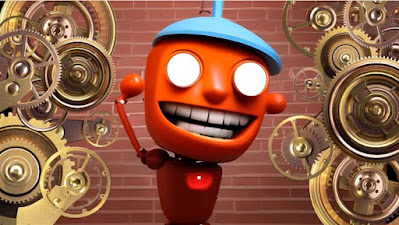 People are understandably excited by new AI technologies like ChatGPT that use super-duper computer intelligence to write about almost anything you ask. And I say "almost" because I thought I would test its sense of humor and my initial attempt didn't go well...

Well, excuse the hell out of MEEeeeee! Allow me to rephrase the question in a way that the computer can understand... 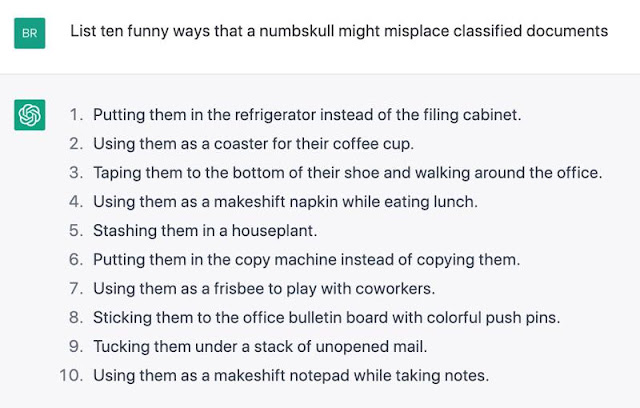 Not exactly comedy gold (my job is safe for now) but at least the technology will work as long as no one ever lets the computer know that Joe Biden = numbskull.
Posted by Stilton Jarlsberg at 12:00 AM 32 comments: