Giving Thanks. No, Really.

If, three months ago, I had been given a quick peek into the future to see my family's circumstances for Thanksgiving 2021, I probably would have had a nervous breakdown. But having lived those months one day at a time (often one hour at a time), I'm something of a changed man - and so am genuinely filled with gratitude this Thanksgiving.

First and foremost, I'm thankful that all of the members of my little family are still here for Thanksgiving since that wasn't a sure thing. And I'm particularly thankful for the amazing strength, courage, and humor with which the women in my life are facing down their challenges. I'm thankful for all of the medical professionals who are routinely working miracles on our behalf, and for the anonymous (to me, at least) blood donors who are gifting us with life on a regular basis.

I can't say I'm thankful for my daughter's whopping ovarian cyst, but I do appreciate that it became symptomatic at just the right time to allow for surgery during a window in Kathy's treatment (best guess is that the surgery will be next week.)

I'm very thankful for family and friends (including you!) who have helped keep us going in these recent months, and thankful that the support is ongoing - because there's a long road still ahead.

On Monday, we had our first detailed talks about a stem cell transplant for Kathy. The procedure usually takes place 4-6 weeks after a round of chemo (which she'll be starting in early December), although it may be delayed somewhat because Kathy will first need to have her gall bladder removed and recover from that surgery. Because we didn't already have enough on our plates.

I'm wildly thankful that a good stem cell donor match has been found for Kathy. Donating stem cells is no picnic; it involves medications that put your stem cell production into overdrive, after which they're collected (via blood that is filtered then returned) through a needle in the donor's neck in multiple 4-hour sessions. Who does that for a stranger? Apparently a lot of people.

To prepare for the actual transplant procedure, the patient receives a Grand Whammy of chemo in order to destroy the bone marrow and the immune system. The donor stem cells are then introduced via transfusion, and the plan is that they'll take root and start producing healthy, non-cancerous blood. Interestingly, not Kathy's blood, but the donor's. Her system isn't going to be "fixed," it's going to be replaced.

The procedure will require a lot of medicine, a lot of donated blood, and a lot of recovery time (with strictly enforced isolation). And while there are no guarantees, it's at least possible that Thanksgiving 2022 will see Kathy cured.  And that possibility is what I'm most thankful for.

So please accept warm and very sincere wishes for a wonderful and meaningful Thanksgiving this year from the surprisingly lucky Jarlsberg family!  -Stilton

Going To Health in a Handbasket

It has recently become clear why there's no idiom in the English language (or any other) which celebrates "The Luck of the Jarlsbergs." Because frankly, we're not seeing much of it lately.

In the past several months, my beloved dog died, my wife was given 2 weeks to live, I discovered that my teeth are rotting in my head and need $10,000 worth of repair, my best friend was diagnosed with prostate cancer, and now I'm about to become the grandparent to an Alien Baby. Alien as in "the kind from space," rather than "the kind that speaks Spanish and is going to get $450,000 just for breaking into our country."

To tell the story quickly, which is all that I have strength for, on the one frigging day last week that Kathy and I didn't need to go to the hospital, daughter Jarlsberg started having severe abdominal pains. We hurried off to CareNow where a doctor palpated her lower abdomen and scored a 10 out of 10 on the pain scale. It was amazing: bells rang, lights flashed, confetti dropped from the ceiling, and a small gallery of onlookers eating fair food cheered. For her high score, Daughter J was instructed to take any prize from the top shelf - although all the prizes were the same: an order to go immediately to the Emergency Room.

Once there, Daughter J was given an IV drip of Clan MacMorphine and hustled off for a CT scan to determine if her searing pain was appendicitis or diverticulitis. But it was neither. The doctor said they'd found a "very big tumor" which was "probably an ovarian cyst." I asked the doctor to convey the approximate size of the growth using the citrus fruit scale, but he had an entirely different part of the produce aisle in mind: "about the size of a watermelon." No, really.

Daughter J has a medical condition in which ovarian cysts aren't uncommon, but whoppers like this one are something else entirely. The good news is that such tumors are almost always benign, and they can be surgically removed unless you're covered by a Blue Cross Blue Shield HMO plan. Thanks, Obama!

Being her father's daughter, the delightful Ms. J is referring to the abdominal visitor as her "alien baby" and she's trying to figure out how to milk a few baby shower gifts out of the whole affair. We hope that the surgery can happen soon, and that she'll have a quick and uneventful recovery (usually about 6-8 weeks).

Meanwhile, Kathy is living with (and fighting) her leukemia every day. Today (Tuesday) was pretty typical: she woke up feeling not great but not horrible. Then continued to get weaker and weaker in the hours before an already-scheduled appointment at the oncology clinic. By the time we arrived, she was so weak she couldn't walk even using her walker and I had to borrow a wheelchair to transport her to the blood lab so they could take samples and see what she was low on.

Everything, it turned out.

See, chemo destroys your body's ability to produce all of the swell things that make blood so useful for tasks like, oh, sustaining life. Your system comes back online slowly, but until then you're utterly dependent on blood and platelet transfusions every few days. So today she got platelets and two units of blood (about a 6 hour procedure), but that will hold her until her next visit...on Thursday. And beyond that, we really don't know just now. Maybe we'll find out more on Thursday, or maybe we won't. The only thing we can count on is that Amazon Prime will soon be delivering the wheelchair I ordered today.

And that's really all I have the strength and brain power to share just now, but so many of you are being so supportive that I want to keep you in the loop. As always, your good wishes, positive thoughts, and prayers are all vastly and sincerely appreciated.

And if you happen to have any spare baby clothes roughly the size of a watermelon, well...

Days Of Our Daze 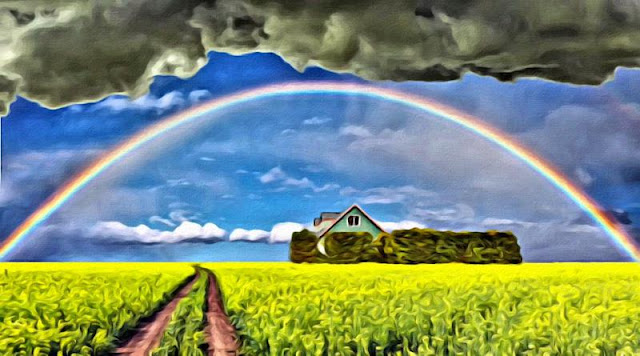 The graphic above is sort of a rough approximation of how things feel right now in the Jarlsberg home. There are dark and spooky clouds out there, but for now we're enjoying relative peace.

Last Tuesday, Kathy checked back into the hospital (scheduled - not an emergency) for her second round of chemotherapy. This amounts to 3 days (rather than 5) of the same old toxins they walloped her with last time, but rather than stay in the hospital during the recovery period she gets to come home (with twice weekly visits to the hospital to see if she needs a transfusion or other care).

We were somewhat shocked when they really DID let her out on time, and Kathy was back at home by early Friday evening. It's worth noting that being home isn't exactly a cakewalk: the chemo continues doing its destructive thing for a few additional days, after which Kathy's red blood cells (for oxygen) are low, as are her white blood cells (for fighting infection), and her platelets (for blood clotting).

When you have really low platelets you're warned against high-risk activities like cutting your fingernails, flossing, or blowing your nose - any one of which could apparently lead to a tsunami of bleeding.

But that being said, Kathy is able to get around without her walker (albeit carefully) and do a number of things. And the whole house just feels alive and inhabited again with her in it.

At some point on Monday (we still need to hear from the hospital) Kathy will be getting an injection of something to encourage her body to start making various blood cells again so we don't have to rely as heavily on transfusions (unlike Biden, probably), then on Wednesday we'll be meeting with a member of the doctor's team to update us on wherever the heck we are in this whole process because there's apparently a HIPPA rule against giving patients more than about 48 hours worth of useful information.

But today is a good day, and I wanted to share that with you!

FROM THE VAULT: Spring Forward, Fall On Your Face...

Seriously, the government just declares a reversal of time and expects us to suck it up without confusion, nausea, and disrupted sleep patterns? Granted, this hits us harder at Hope n' Change than it does many others owing to the fact that we suffer from "dyscloxia" which prevents us from reading the face of a clock after the time change and having any idea whatsoever what time it really is.

We're not kidding. We're writing this at 1:22 pm and can honestly tell you that we are clueless about whether it should actually be 12:22 or 2:22. But we know with absolute certainty that it's only an evil and all-powerful government claiming (preposterously) that it's 1:22 and we're not buying it.

We fail to see any upside to Daylight Saving Time whatsoever, with the slight exception that since the government has declared time to be malleable, we can pretty much declare it to be "happy hour" whenever we like.