Yes, I know that this is Stilton's Place and not Johnny Optimism, but there's enough overlap today that it didn't seem to make much difference.  Today is Kathy's birthday and I don't yet know how that's going to affect me today. Or to be more specific, I don't yet know if her birthday will make today suck even harder than usual.

So why the heck would I call today's post "Ketchup Day?" Because that's sort of how I'm thinking of it (admittedly, my thinking equipment is a bit the worse for wear these days). Because Kathy and I liked to joke about her being an "older woman" since she was one year older than me for nine months of the year. But today, her age isn't changing and I "catch up" (get it?) and will stay caught up until my next birthday, when I'll be older than she ever got to be. Dammit.

But there IS some good Kathy-related news today! The book project I've been talking about has come to fruition and is now a Real Thing. I'll be doing a full post about it soon; I'd hoped to do it today but couldn't quite pull it off. But in the interest of giving you a sneak preview, here's what I have in mind: probably within the next week, I'll set up a promotion on Amazon that will let all of you (and everyone else) download the ebook version for free for a limited time, and I'll also have the paperback on sale for the lowest price Amazon will allow ($3.58) which translates into $3.58 for them and $0 for me. Afterward, the price will likely be $4.99 (with any profits on my end going straight to Leukemia research and support).

Once I've gotten the book into your hands, I'll be requesting honest Amazon reviews so that the algorithms will have to concede that the book exists. But those details can wait - I just want you to know that this funny little celebration of Kathy has turned out great and will be available to you soon. So Happy Kathy's Birthday to us all!

The Old Man and The Sheesh

Sunday, November 20th marked the 80th birthday of Joe Biden, the extremely oldest man to ever hold the office of president of the United States. Mr. Biden celebrated the occasion by sucking his wife's fingers, wandering aimlessly through the White House halls, then having an ice cream cake as balloons cascaded down on him. Balloons that had filled themselves to the bursting point thanks to inflation.
And although I personally loathe the news these days, it's hard to ignore the fact that there has been a bunch of it lately - all of which I'm perfectly happy to be unclear on.
One notable item is that Nancy Pelosi is stepping down from her Democrat leadership position in the House of Representatives, a role which she has held since the mid-Pleistocene Era. She is vacating her leadership responsibilities in order to spend more time with her family and definitely not in order to hire a less inept hammer-wielder than the one who klonked her husband on the noggin, nearly causing her to inherit the millions of dollars he's made through her illicit stock tips.
On a barely related note, I've been playing with some of the new Artificial Intelligence art generators because that keeps me off the streets and away from a life of crime (it's too cold to sell magazines door to door).  So if you were wondering what AI thinks a Norman Rockwell portrait of Nancy enjoying Thanksgiving with her very, very, very diverse group of friends would look like, here you go... 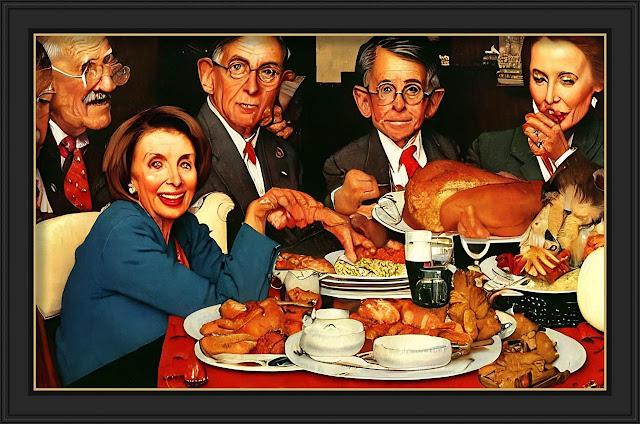 Also in the news (as far as I can tell from cultural osmosis), a major cryptocurrency, FTX, went bust making roughly gazillions of dollars disappear in a digital "poof!" This sudden poofery revealed a funny little scheme that went like this: Democrats sent billions of our tax dollars to Ukraine for "defense" (wink-wink, nudge-nudge). Ukraine then "invested" much of that money in FTX, making FTX's owner stinkingly rich. He, in turn, gave a significant part of this newfound fortune back to the Democrats (his donations were second only to those of George Soros) to help them defeat Republicans in the midterm elections. In other words, it was the traditional Washington circle-jerk kickback scheme but on an especially large and obvious scale.

Donald Trump announced that he was running for President again, because our national drug trip still appears to be a long way from over. Simultaneously, Merrick "I was told I'd get a robe" Garland has appointed a special investigator or prosecutor or interrogator or Witchfinder General or someone to persecute Donald Trump yet again. The media, and I use the term with revulsion and disdain, is absolutely sure that Trump will soon be indicted for his role in planning the nuclear explosion that leveled Washington DC on January 6th, killing millions and incinerating the paper records which tied Democrats to ownership stakes in FTX. Or maybe he'll be indicted for "using locker room language while not in a locker room," which has been unanimously ruled to be unprotected speech by the ladies of "The View."
Meanwhile, Thanksgiving is coming up on Thursday and I will be especially thankful once it's over. The holidays will be sheer torture for Daughter J and me this year. Kathy was the one who made the holiday magic around here and there's no "plan B." That being said, I'm nervously looking forward to doing Thanksgiving - for the first time since Covid hit - with my brother-in-law and his family. This will be the first time I've seen some of the family in years, as well as my first sit-down dinner with others while not wearing an N95 mask. And mind you, I DO wear an N95 in other public settings, but damn it - family is family. It is likely to be emotional.

I'll almost certainly not be posting again before Thanksgiving, so let me wish everyone the very best of meals, family, friends, and the spiritually nutritive practice of giving thanks.

After finishing this blog post, I need to dive back into working on the book project I've spoken about because it's really getting down to crunch time (I've promised copies to members of my grief support group on December 12th!) and time flies when night falls hours before you expect it to. But in the interim, here's a little sneak preview of the unfinished cover... 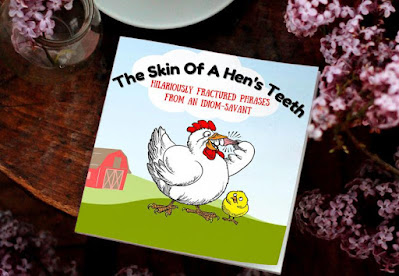 I'm looking forward to sharing the whole book (and Kathy's sense of humor) with you soon!
Posted by Stilton Jarlsberg at 12:00 AM 36 comments:

So the election results are in, sort of, in some places, allegedly, and the Big Red Wave that so many were predicting turned out to be just the same old crimson trickle of blood dripping from Planned Parenthood's dumpsters.

Americans had a chance to vote against inflation, skyrocketing energy prices, failing school systems, galloping sexual deviancy, discrimination by skin color, child mutilation, child murder, unsustainable spending, critical race theory ("White people are bad and should go into shallow graves right after they give us their wealth"), collapsing infrastructure, wide open borders, the destruction of personal responsibility, and so very much more - but instead, a preponderance was convinced by celebrities to, um, "vote Blue." Because they're morons.

None of this was a great shock. I never thought there would be a red wave because it required a willing suspension of disbelief that I just can't conjure anymore. Was there anything - anything - in our culture, media, or the national moment to suggest that great masses of people would suddenly become less ignorant, selfish, debauched, and debased? Nope! And so "more of the same" was obviously what was coming and, sadly, what is coming for the foreseeable future. And no, Trump can't change the equation no matter where he grabs it.

Instead, I'm thinking our nation (and quite a few others) is overdue for the Sodom and Gomorrah treatment. Mike Lindell should stop doing commercials about "My Pillow" and instead start evangelizing about the benefits of "My Pillar" and citizen-shaped stacks of salt, while Boston's "Don't Look Back" rings from stadium speakers. In the words of George W. Bush, "Bring it on."

And I apologize for being such a grumpy old downer today, but I can't help it. The Jarlsberg family has recently been shaken by another death (albeit not family), a succession of gray and gloomy days, and midnight now showing up outside daily at 6 pm.  Plus, I'm currently dancing with a couple of government agencies (Treasury and IRS) in minor but frustrating ways.

Still, TGIF, a good weekend to all and, most importantly, Happy Veterans Day. Say "thank you" a few times today, in person or in your heart. 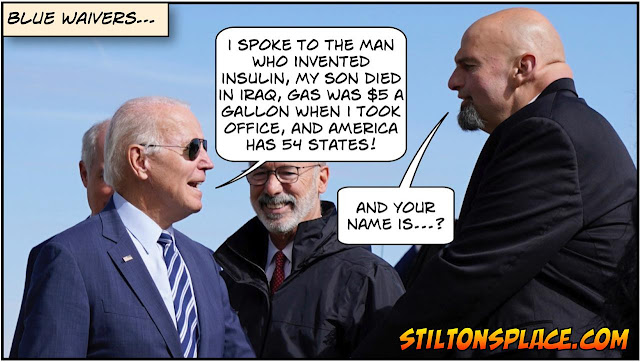 Depressingly, this is the actual state of our nation as we head toward Election Day. A president who can't speak without lying, and a major Democrat candidate who often can't speak period. Which isn't Fetterman's fault - the man had a stroke, after all. And it's rare to see someone who has the strength of will to immediately get back on the election trail without taking time for his brain to effing heal. Which it likely won't since he's been literally abusing it during the most critical window for recovery. Still, I don't want to kick a man when he's down...

Okay, that probably LOOKS like I'm kicking a man when he's down, but I have a well-documented psychomotor condition that causes me to kick involuntarily from time to time and if you hold it against me you're an ableist and should be ashamed of yourself.

Of course, we're all looking at a brief period of disability following this weekend...

Some people may take exception to the cartoon above, saying "But Stilton, we get an extra hour of sleep so we'll be feeling great!" And I certainly respect your opinion and that of the horse you rode in on. But for me, personally, whether we're springing forward or falling back, I lose sleep and am out of sync with the world for at least a week or two while playing the "yeah, but what time is it really?" game in my head.

Nor does it help that suddenly it will be pitch black outside about the time I normally consider to be "late afternoon." But hey, I guess turning on all the lights for an extra hour a night won't kill me. It's not like anyone wants us to cut back on energy use to save the planet or anything, right? 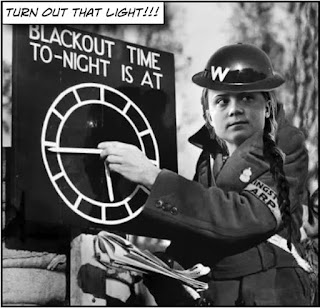