Yes, the "coffee couple" we've been meeting with for ten years are back at work for your entertainment, albeit with a somewhat modified wardrobe.  How any coffee actually makes it to their lips in those suits isn't quite clear, but there's surely some benefit just from seeing friends and holding a hot cup.

On a barely related note, we created a political cartoon to run today...but then decided against posting it. Frankly, it just feels wrong to engage in partisan politics (even if we're entirely right, and the other side is entirely wrong) during a "we're all in this together" crisis. Hopefully this sentiment will spread, but even if it doesn't, it feels like the right call for now.

Instead, we'll simultaneously keep things light and focus on the matters at hand. Which is pretty much what's going on in the cartoon below...

BY POPULAR REQUEST: SUPPLY AND DEMANDS

Okay, here's the cartoon that I hadn't posted. Discussion to follow:

The genesis of this cartoon is that I'm sick of hearing people on the Left claiming that the emergency funding measures being undertaken are an admission that "socialism is the answer and always has been." Wrong, wrong, wrong.  And I thought relating that to something tangible like the availability of masks (and the ability to gear up factories in a hurry) might make my point.

However, Bernie hasn't said anything like the specifics above - I was just using him as a handy (albeit pretty accurate) straw man. Which made me feel like the cartoon was sort of petty; Bernie's campaign isn't going anywhere, and the overall tenor of the cartoon has an "us against them-ism" which I'm not comfortable with right now, even though the Left is definitely not in the mood to treat this as a time for unity.

So your thoughts are welcome - was I right or wrong to have reservations about this one?
Posted by Stilton Jarlsberg at 12:01 AM 33 comments:

The coronavirus siege continues, and doesn't seem likely to change anytime soon (you can visit this Youtube site for the best and most accurate daily updates we've found). And although we take the matter seriously, we still refuse to take it solemnly - believing that laughter is the best medicine even if, like a ventilator, it needs to be shoved down our throats.

Which is why we're eschewing (gesundheit!) politics here except when absolutely necessary. Rather, we'll continue to post amusements, diversions, witticisms, and hilarious cartoons like this one:

Yikes! That was dark. We're starting to regret bartering with the neighbors and trading our antidepressants for toilet paper.

But on a different note entirely, our publication of a few pages from the "Spensive Gifts" parody catalog reminded us of the Johnson Smith novelty catalogs we enjoyed in our youth. Which prompted an online search and the discovery of goodies like this... 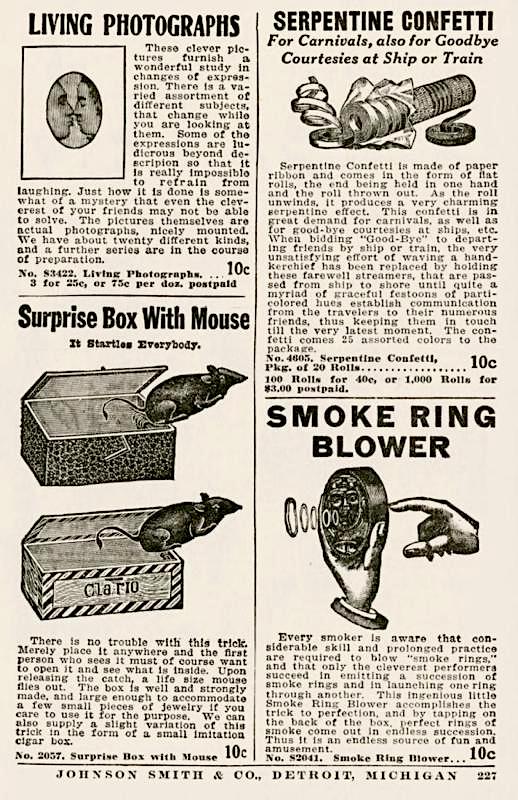 What you see above is a page from the 1938 version of the Johnson Smith catalog, which you can read online right here in its glorious 600-page entirety!

Relive the excitement surrounding the first appearance of the Whoopie Cushion! Thrill to the comic hijinks of a kid using the "Ventrillo" voice-throwing device to make an unsuspecting man say to a policeman "Hey copper, I'm gonna punch you in your big, fat nose!" Delight in unknown wonders like the crank harmonica which uses tiny player piano-style rolls of paper to give you "a jazz band in your pocket"! Marvel that there was once a time in America when kids could order actual "live baby alligators" for $1.50 (or a living 3-footer for just $6.50)! And cringe at a sprinkling of absolutely jaw-dropping items which are now career-ending, code red objects of political incorrectness!

We may well be starting a long rough patch in our country, but it's refreshing and frankly inspiring to see the kind of marvelous foolishness people were still enjoying despite the Great Depression. There's a lesson there for all of us. Albeit a fairly stupid one.

During this extended period of self-isolation, it has been suggested that we all spend some time reflecting on our past and coming to new insights about who we are, deep down inside. We've done that and, based on everything in our past, determined that we've pretty much always had a screw loose...and enjoyed it!

For instance, about 30 years ago, we made a parody version of a "Spenser Gifts" catalog just because the idea tickled us. We used actual products from their pages, but substituted our own text - attempting to match the clipped and overly-enthusiastic style of the actual catalog.

Because desktop publishing wasn't really a thing back then, the original "Spensive Gifts" catalog was assembled with clipped bits of paper and a glue stick. Copies were created with a Xerox machine. And while the original catalog has disintegrated with time, the Xeroxed copies live on in all their low-rez, black and white glory.

The whole shebang is 24 pages long, and we've been toying with the idea of making it into a Kindle ebook. For now, here are three pages - let us know if you'd like to see more! 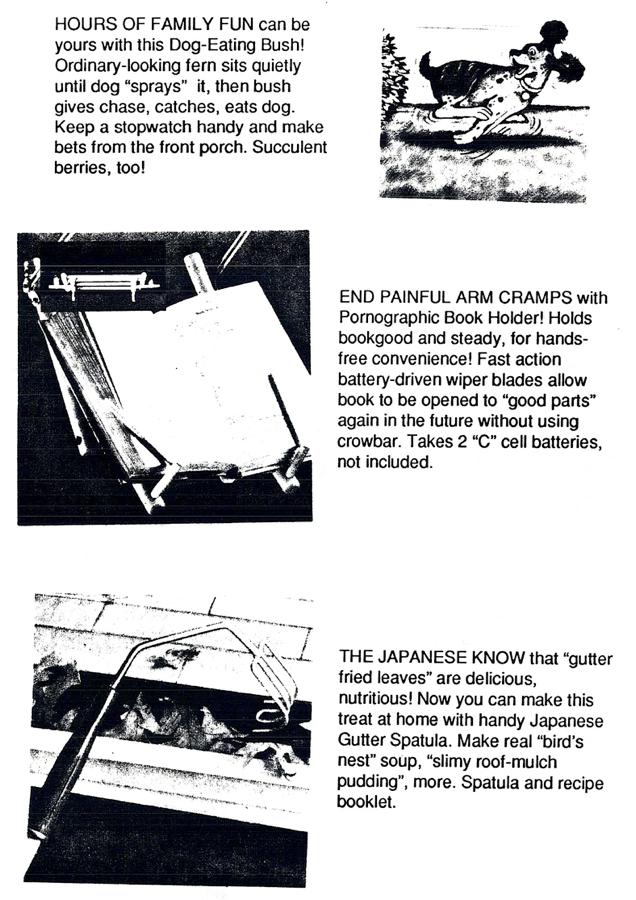 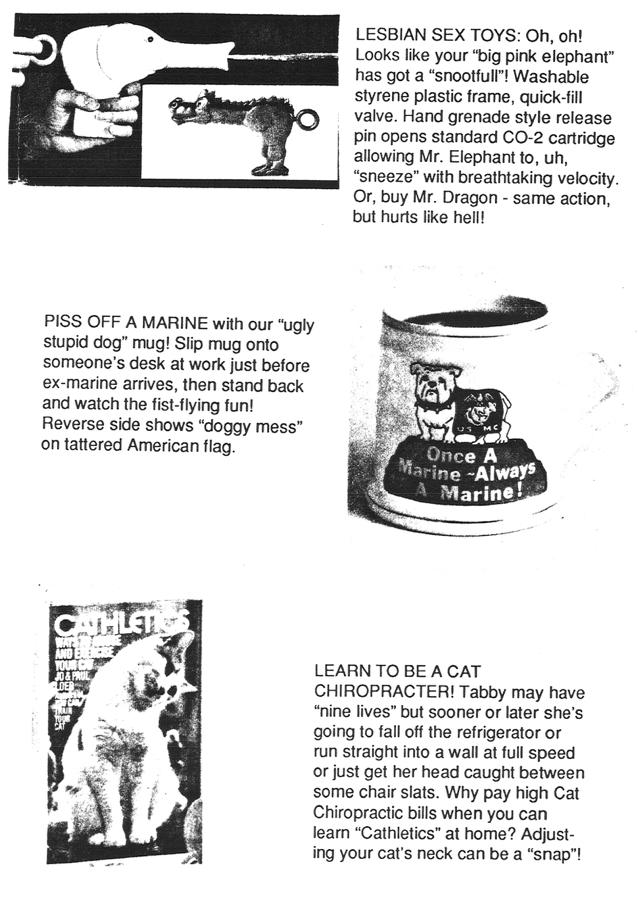 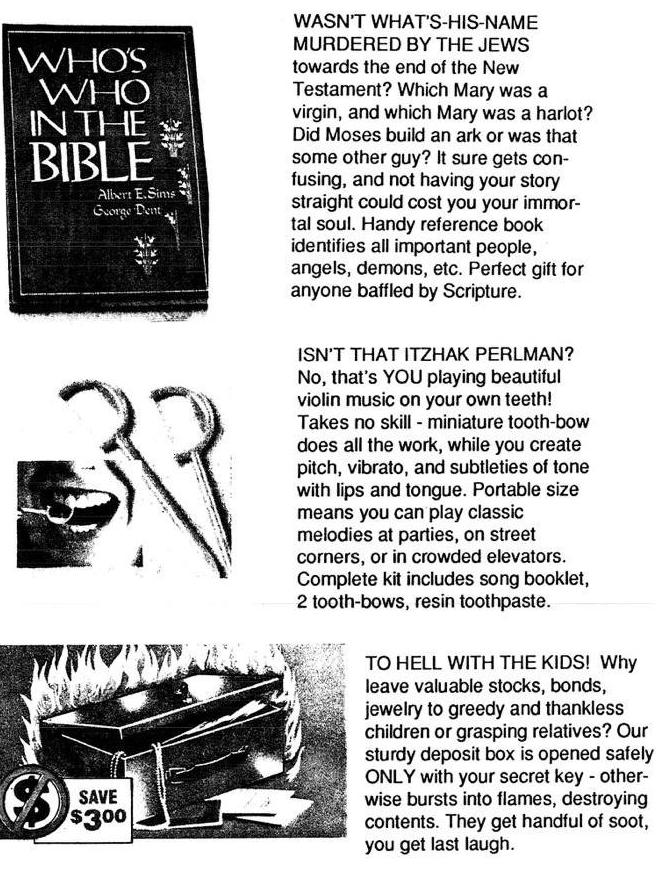 AND ONE MORE THING...