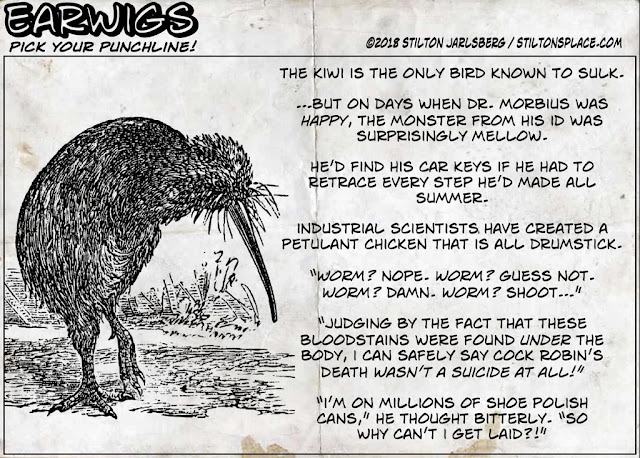 We're easing into the week with an Earwigs post because multiple sources in the media have declared that today, April 23, the world will come to an end - so we thought "why bother?"

The actual cause of Earth's destruction today isn't quite settled science. Some are saying that a phantom planet which usually hides coyly behind the sun will smash into us today, while others have declared that they've found previously unfathomed hints in the Bible that today will be the beginning of Armageddon. In either case, you'll surely be able to catch it all on Facebook Live.

It's particularly ironic that our planet is going kaput today because we're no longer incapacitated by acute diverticulitis. We're actually much improved, and pounced on a dab of scrambled eggs and white toast today in much the same way that the bird above would hurl itself at a worm if he ever sees one.

Eggs and toast might not sound like deluxe dining, but after a week of dining on thin broth, Werther's originals, teriyaki sauce, and gummi worms it felt like a feast! And this is as good a place as any to thank everyone for their well wishes and advice over the past week - all were (and are!) very much appreciated.

And no, we still can't drink liquor. So we wish the news media would make a greater effort to meet us halfway by not reporting so many things that would normally drive us to drink.

Further bulletins as warranted, and see you in the comments section! (And if anyone has previously missed it, just click on the title above each day's cartoon - like "Kiwi's Playhouse" today - and you'll be whisked away to the comments section where wisdom and hilarity cavort in equal measures!)
Posted by Stilton Jarlsberg at 12:01 AM

Glad to hear you're feeling better.

Ditto on the feeling better! Keep up with the icky diet (yay Jello?). I'm on a soft diet for a few more days thanks to the absence of a tooth (not willingly, I might add) so I feels your pain.

Cock robin? I haven't heard that in a zillion years. Used to make us kids cry....

Say, I forgot to ask: What became of the links to Twit, Faecesbook ad nauseam?

Flightless my ass ....got the tickets right here in my pocket and just confirmed my reservations ....

Well looks like a good thing I put off mowing the lawn yesterday......

Just keep thinking happy thoughts : Chicken fried steak and eggs, single malt, porterhouse smothered in mushrooms, Maker's Mark, eggs benedict, Shiner's Bock, lobster tails in Newburg sauce, twice baked potatoes covered in bacon bits and cheddar, etc. A few years back I was on a three day fast for a colonoscopy, subsisting on prune juice and 2 gallons of purgative. One bit of solid food and 20 minutes of grief in the WC followed soon afterwards. These were the things that I thought of while sleeping on the loo. The big day arrived and then it was done. Passed with flying colors. My brother took me to my fave Tex-Mex bar and grill where I proceeded to make up for lost time. 2 hours later he rolled me out of there on a dolly. Went home and slept for the rest of the day. Hope your affliction comes to a satisfying conclusion like mine did. Remember, we're all pulling for you and be sure to keep your stick on the ice................

May you soon be feasting on all good things. Glad to hear you're improving. I'm keeping you in my prayers.

"And no, we still can't drink liquor. So we wish the news media would make a greater effort to meet us halfway by not reporting so many things that would normally drive us to drink."

So you want them to stop "reporting" at all?

Stilt: Glad to hear that whatever you did, worked. At least the cure is not as bad as the malady. News not news: Saw a pic of the VIPs at the BB funeral. There sit the crook with a cast on her right arm. It seems her falling on her ass and breaking something is not news anymore. On the other hand, do flightless birds exist anymore? Seems they would be fast food for predators. Then, for about four years,a Lady Amherst pheasant visited up daily, having escaped from me neighbor's Paul cage. The wife fed it morning and night. Then, last week a hawk killed it. Google a pic of a male and see a beautiful bird that met his demise because he did not like to fly.

"But they did name a fruit for me"

Glad you are feeling better.

"You know...just because I have this thing doesn't mean that I like ants!"

"Are these my tracks?" "Damn, I'm walking in circles!"

My attempts on an otherwise humorless day.

If today is really the day, I'm ready. We run the neighborhood avian flophouse with 2 feeders and 3 birdbaths. That's all cleaned up and as a bonus, I cussed out a cat that was waiting patiently for a snack. I have a new, to me, library book that appears to be interesting, so I will wait quietly for the pocky lips. Maybe with an ice tea from Sonic and some pretzels.
If nothing happens by midnight, I'll just go to bed and see what threat tomorrow brings.

I am glad to hear of your health improvement. However, if the worlds explodes, it don't mean dick.

Damn! I put down a bunch of mulch yesterday.

Thank goodness that the world is ending. My life has been kind of a mess ever since I gave away all my money, quit my job, and assaulted the neighbor girl LAST time they said the world was going to end.

I thought I'd put things back together, but nope... so it's just as well.

Stilton, glad you are making progress. Just let me know when I need to curtail the Scotch whisky intake, so that we can keep the world in balance. Just trying to do my part.

I need a good dose of good news right now so this is double-nice. Your good news is most welcome; I hope it keeps getting better.

It's today!? Dang. And I just paid my Verizon bill! If I'd have known the world was ending, I'd have told them to zark off.

@Judi King,
Imagine the first marketing meetings. "We have developed a fruit that's as ugly as this pathetic little bird, so let's give it the same name and go out and SELL it to the world!"

@Stilton,
Glad to hear your horrid diet is paying off. I see scotch and steak on your future! Well, if the world doesn't end today, that is. If you see the giant meteor coming, pig out, dude!

Glad to see I'm not the only "Red Green" fan to skulk about the hinterlands of this place. :-)

@Velveeta Processed Cheese Food- Trust me, I'm glad to be able to say it!

@mamafrog- I'm behaving myself on the foods but am gradually adding some things. Like a very, very, very well chewed potato chip. Hey, I'm a wild man!

@S. B. Sweeney- All of the really classic children's rhymes and stories are cruel and horrible, and frequently refer to real events like the Black Plague. And in this case, I don't mean Obama.

@M. Mitchell Marmel- D'oh! I never noticed! Guess I'd better look to see if those can be added again!

@Regnad Kcin- I fully intend to have a foolish food celebration when I can, but won't be able to jump straight into it like you did. I think a big Mexican meal would probably still kill me. Like they say, "Do not ask for whom the Taco Bell tolls...it tolls for thee."

@Jim Daily- I once had a cracked bone in my wrist and had to be in a cast for several months, so Hillary's cast is plausible. But I think it's actually a way for her to conceal her passport and Swiss bank account number in case she needs to make a run for it.

And so sorry about your friendly pheasant. Hawks do what they do, but there are so many birds that you didn't have a relationship with.

@Gumby-damn-it- See? It's FUN to play the Earwigs game! I think staring at art until I have odd thoughts is my personal form of meditation.

@Sortahwitte- Ooh, birds, a good book, and pretzels? I like your style!

@AmyH- Ha! That's what we say each Spring after a heavy rain!

@Harry Hamid- Don't you hate it when you go on a wild crime spree and then the world doesn't end after all? "Sorry, Officer! Is there egg on my face or what?!"

@TrickyRicky- I think you can continue drinking for two for at least another week.

@Colby Muenster- Even better than the marketing meetings for Kiwi fruit were the meetings that came up with the name for "Ugli fruit." Have you seen those things?! Look like Deadpool's butt cheek...

Then, I shall, drink an entire bottle of vodka in your honor. HAIL THE JARLSBERG!

Man mows down a crowd of people in Toronto in an obvious terrorist attack killing at least 5 and CNN is calling it a "collision".
Authorities are not releasing any information on the culprit which tells me he's NOT a white Christian Conservative Trump voter.
Yeah, we would be better off with no news than their version of the news,
AKA propaganda.

Dang, and here I put up a new snap-together plastic shed Saturday. If only I'd known...

Sigh. Guess I'll put up the patio cover we just ordered two weeks ago. Warm weather (finally!) and all that.

Chinese Gooseberry didn't make it through the first planning meeting for marketing a luscious antipodean fruit. So as the group was hankering for a drink, one of them suggested calling it a Kiwi. Thus, we now have a green fruit, not native to New Zealand, called after a flightless bird, that is a native. Kiwi is easier for Americans to remember I recon. Get well and treat your innards with gentle respect so they may heal.

@Stilton - My celebratory repast consisted of a double order of Carne Asada, medium rare, with rice and refries, smothered in green chile. Washed it down with lots of Pacifico beers and shots of Patron. For your recovery dinner, might I suggest a warmed prune Danish and a large mug of Metamucil........