One of the happiest political stories of the past week involved 11-year old Frank Giaccio, who wrote to President Trump asking if he could mow the White House lawn to promote his self-created business and was awarded the job.

"That's the real future of the country right there," beamed Mr. Trump as he pointed at the young entrepreneur. "Maybe he'll be President someday!"

When questioned whether he'd also asked Hillary Clinton if he could mow her grass, young Frank replied "No, but I did offer to shovel her snow."

"But there is no snow," said Hillary.

"Lady," laughed Frank, "there'll be snow in Hell before you're in the White House!"

(Editorial note: we may have made up the part about Hillary) 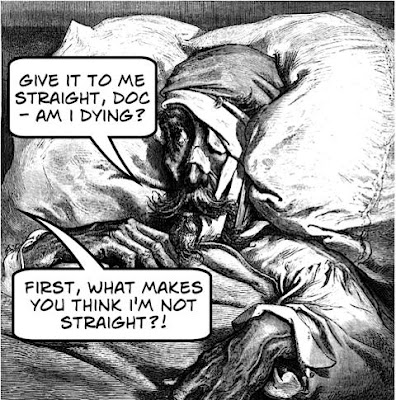 We're a little light on substance at Stilton's Place today (despite plenty of things going on) owing to being impressively, disgustingly ill. Mrs Jarlsberg got the ball rolling with sore throat, sneezes and coughs, and we hoped beyond hope for 24 hours that it would prove to be just allergies (have we mentioned our home is really dusty lately? We have? Never mind).

But nooOOooo, a happy little invading army of germs has swept through the Jarlsberg home and taken no prisoners. Even our freaking teeth hurt, and it's getting increasingly hard to find walls which aren't freshly painted upon which to cough blood-flecked phlegm.

We'll be right as rain soon, but in the meanwhile you may want to wash your hands if you actually touched your keyboard while reading this. Better safe than sorry.

I got a name for the kid's business: "Lawn Cheney" !

For all our sakes, get well soon.

Blessing on you and yours. What a strong marriage!, tested by home renovation and sickness simultaneously.

May your new paint clean right up and the healing begin.

What a sweet story about the boy. I assume you made up the "snow" story, but it was a good one. GWS

Man, Do a double Cutty, straight-up and call me in the morning.

@ Samuel Price: That's my favorite remedy also. But I don't care what whiskey is used.

140 proof Moonshine with just a dash of 140 proof moonshine. With or without ice and a touch of moonshine. There, hope that helps.

Good luck with your illness! I JUST GOT OVER SOMETHING SIMILAR- IF IT'S THE SAME, i CAN TELL YOU THAT WHEN YOU START BLOWING WHAT YOU WILL BE CONVINCED IS BUTTERSCOTCH PUDDING OUT OF YOUR NOSE, YOU'RE IN THE HOME STRETCH!

SORRY ABOUT THE CAPS LOCK- JUST NOTICED IT AND NO WAY AM I RE-TYPING ALL THAT.

Grapefruit & Jack, PO Q4 and PRN. Imbibe while perusing pictures of Busty Ross. The juice provides vitamin C, the Jack will aid in relaxing any tight muscles, and Ms Ross should put a smile on your face (of course, that might tighten peripheral muscles but that's the risk one takes with this RX.)

@Porkyspen: Go and sin no more. Actually....I am waiting for Costco to complete my new progressive-lensed eyeglasses, so caps are more than welcome in the meantime.

I am a firm believer of never taking any medication (other than possibly bourbon) when I come down with a cold. They only treat symptoms, and thereby can allow the germs to thrive for much longer. Coughing, sneezing, runny nose, etc. is your body's way of expelling those germs. If surpressed, the germs tend to stick around a lot longer. I do not recall ever having cold symptoms for more than 3 days in my life by simply letting it run it's course.

Your poor family... I'm sorry that you have to deal with germs... maybe if you moved farther from Washington D. C. I hope people don't mistake your nationality for Phlegmish.

I hate when that happens, your cold I mean. Please get better soon. Free America is depending on you.

Hey Geoff, I don't know if honey, whiskey and lemon works but it sure tastes good.

Stilt, it appears you are living in the "when it rains, it pours" zone. It doesn't ease the misery, but this too shall pass. I'm looking forward to your take on the Trump bashing Emmys, should you choose to so opine.

@Geoff King, I'm going to try your (non)remedy approach to my next cold, should I be so unlucky to get one. It makes perfect sense.

@Readers- Thanks for the "get well" wishes; they're all appreciated and all still needed. I've developed a honking cough (I'm not using a euphemism there - I actually honk), and my desk is disappearing under a blizzard of snot-soaked tissues. At the moment, the hardest symptom to deal with is a pounding headache which doesn't respond to anything (though I haven't tried the hot toddy yet). Yesterday I got a little relief by standing under a hot shower; today that shower is scheduled to be demolished, so I actually tried the expensive NEW master shower which was first approved for use on Sunday.

The problem: I stood outside this grand new granite-adorned shower in my birthday suit with my hand stuck in the water flow, and it never got hot. Even remotely. I initially panicked (we all have our talents), but looking on Youtube it seems likely that this is simply a safety feature mandated by (who else?) the government. Theoretically there's a doohickey in the valve which can be adjusted to actually make new shower hardware functional, while also providing a steady stream of revenue to the plumbers who lobbied for this jackass feature.

I'd say more, but the guys with the sledge hammers are here to start bashing away at the bathroom about 3 feet from where I'm sitting. Oh, my aching head...

@Samuel Price: What, and drive off the alcohol?! Calm yourself, man! No need to go all wacky!

Honey, lemon, and whisky (or whiskey) - room temperature or cold - is my preference!

And this is how the left characterizes the young entrepreneur's initiative, and likely why the country is in the state it's in:

“What this kid [mowing the White House lawn] wants to do is noble, but sorry, I’m mindful of problems — I’ve written lots about child labor & kids being hurt by machinery.” —New York Times’ Steven Greenhouse

No sign of wanting to be productive, entrepreneurial, and self-starting will go unchallenged by the left. There's ALWAYS a reason it needs to be quashed, real or imagined...

Stilt: Those little things mean a lot. When in gov't jurisdictions or using code plumbers we have to put up with their rules for your safety. Out in the country at our cabin it's my rules. We have an old claw-foot cast iron tub that's just inches from the hot water heater on the other side of that wall. And it's set on hot. Instant hot water for whatever reason including plate warming in the winter or hot face soak for shaving; hot tub as you like it. And it doesn't require much cold well water to dial in the temperature you want. When not there we turn the gas valve to small pilot flame only (as well as other interim shut down procedures) and that keeps the HW tank lukewarm; helps prevent freeze-up in winter. That's all independent of electrical power. The older ways have their merits. Continued good luck and get well; you two sure planned a very ambitious re-do of the house.

By the way all y'all; moonshine will not cure your cold but at least you won't care. Yay 'shine.

@Emmentaler Limburger, disgusting. I didn't go out of my way to look, but I knew there'd be some leftists out there somewhere to find something wrong with a kid actually wanting to do something productive with their time and energy.

No doubt Steven Greenhouse's kids (if he even has any, which I somehow doubt) would be much better off with leftist-approved activities, such as self-medicating and questioning their sexual identities.

Off-topic: Looks like the ratings for last night's Emmy awards are in. Seems like Steven Colbert's warning to conservatives not to watch was taken to heart. My only regret regarding this is that I couldn't possibly boycott Colbert any more than I already do.
Quite frankly, I can't relate to people who think that watching hours of self-congratulatory virtue signalling is a worth-while way to spend an evening. Literally, a celebration of narcissism at its absolute worst.

Stilt, why not visit the hospital Johnny Optimism is being "treated" at. I'm betting the medical staff will find an interesting way to "cure" your malady.
p.s. Make sure your will and other affairs are in order before you go.
pps Is that hospital run by the gentle Sisters of Good Luck With That?

Stilt: Just read today's episode of Johnny. Was that just a coincidence???

Well, if Steven Greenhouse believes all the liberal crap he and his ilk spew, he likely HAS no kids because he's to busy questioning HIS sexual identity...


And just remember, Cuz: It ain't the cough that carries you off; it's the coffin they carry you off in...

Speaking of "fake news" and Trump: Help me out here; how many times has Trump said something the media claimed was "outrageous" and then over time it turned out to be true? Remember a few months ago when the media mocked Trump for saying that his campaign had been under surveillance?

"US investigators wiretapped former Trump campaign chairman Paul Manafort under secret court orders before and after the election, sources tell CNN, an extraordinary step involving a high-ranking campaign official now at the center of the Russia meddling probe.

The government snooping continued into early this year, including a period when Manafort was known to talk to President Donald Trump."

Ooops. Not holding my breath for the mea culpas.

I don't read newspapers anymore, but will bet a hundred bucks there was at least one in the USA with the headline, "Trump violates child labor laws!"

@Stilton,
Well, colds really suck, or maybe the better adjective considering your mountain of tissues, is blow. Here's hoping and praying for a quick recovery, although if you try every drink recommended in this blog, you may not give a shit if you have a cold. Along those lines, my favorite is rotgut Mr. Boston Rock and Rye with ice.

@Emmantaler,
It's pretty obvious this Steven Greenhouse turd grew up in a family where he was not required to do chores. My father had me dragging a mower around the yard as soon as I could reach the dang handle and actually push the thing. He explained to me that the blade could cut off my foot or toes, and that's all it took to convince me to operate the thing in a safe manner. This led to a neighbor actually paying me to mow their lawn, then another, then another. Before I know it, I was rolling in the cash at the ripe old age of eleven, and that was after I paid dad for gas and mower rent!

Is my OCD getting worse or are there tufts of grass left over on each row? It's ok though, he's only a kid and it IS a gummit job.
Thorry you are thick. Codes are terrible.