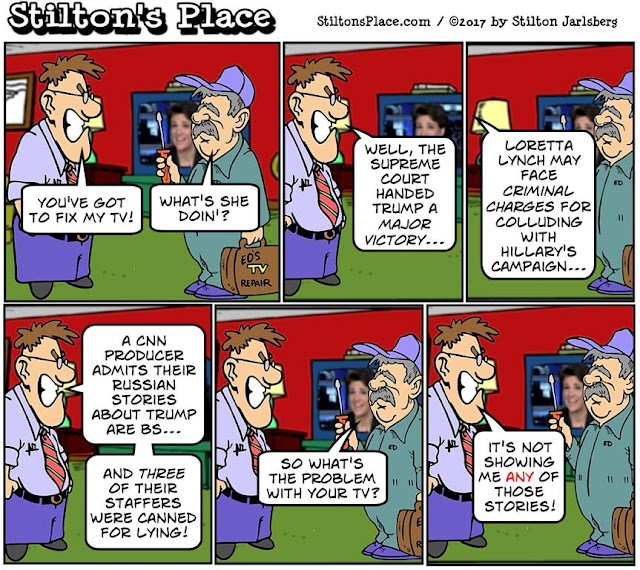 We assume that, as always, folks on the Left aren't receiving anything remotely like the actual news - mostly because we're not hearing their tortured moans and groans on social media.

Which is sort of disappointing; imagine how it would feel for them to know that Trump's "pause" in immigration from countries with out-of-control terror wasn't just okayed (for now) by the Supreme Court, but that it was done unanimously. So much for the circuit courts!

And how delicious is it that Loretta Lynch and John Podesta are both being hauled in front of Congress to be questioned about their mischief and misdeeds before and after the Presidential election? If what James Comey has said is true (always the flip of a coin) about her obstruction of justice, Lynch could be looking at 5 to 10 years in the slammer.

And then there's Project Veritas, revealing undercover video of a CNN producer admitting that the whole Trump/Russia story is (ahem) "bullshit" and being advanced solely in pursuit of ratings. The collateral harm to the country is, for them, just a bonus.

There's a reason that there is an almost unprecedented divide between those on the Left and Right these days: we're not hearing the same news and not getting the same facts. Even as we speak, those on the Left are really only hearing two things: that Republicans are suddenly hell-bent on killing millions of people via healthcare reform, and that Trump partnered with Putin to steal the election from Saint Hillary.

It's little wonder that they're angry, and frankly tragic that their anger isn't more appropriately directed at those who labor so consistently to keep the liberal Left in ignorance.

Having never been a Trump fan or supporter, I do have to admit that I enjoy the "winning", and doubt I'll get tired of it any time soon.

Supreme Court: Not only was the ban on Trump's ban lifted, it was lifted unanimously. That does not happen often. Also, it's a major slapdown to all of the mediocre Federal busy-body judges that gleefully signed off on staying Administration policy on transparently partisan grounds. A pox on your careers.

Loretta Lynch: I'm not holding my breath on Loretta getting the comeuppance she so deserves, but it is a bad sign for Democrats that this whole "Let's get Trump with a special prosecutor" vendetta is starting to backfire big time. Can't wait to see what the net drags up next.

CNN: Swirling ever closer to total irrelevance, the entire network now possesses the moral authority of Dan Rather. Oh, and the original source of the bogus "Trump Dossier" story? Operatives in employ of the Clinton Campaign. Surprise, surprise!

It's no surprise that my friends who seem to get their information from comedians on comedy channels don't know any of this, much less those who rely upon the traditional alphabets.

Last year while these outlets were feeding my Progressive friends the narrative that the GOP was disorganized and totally irrelevant, I was warning them that it was in fact the Democratic Party that was in the midst of an irredeemable implosion. They still may not realize it.

In the meantime, I am enjoying the "winning".

I will admit to being FAR more impressed w/ Prez Trump than I EVER was w/ Candidate Trump. I really DO think he wants to MAGA.
And yes, lock Her up, and her, and him, and him, and all THEM, and...
And no, SO not tired yet of winning.

If only I had a device to jam the televisions in airports, every one of which are tuned to CNN all day, every day. Just another reason not to fly.

Oh, my. I think it was Rush that mentioned that President Trump could appoint several independent prosecutors. So what if he appointed a special prosecutor for Clinton, Clinton, Lynch, Schultz, Podesta? Would that not be juicy? He may be holding that in arrears as a Trump card. One of my favorite laws is the law of unintended consequences.

"But it's the truth, even if it didn't happen." There are many good quotes from One Flew Over the Cuckoo's nest, but this is one of my favorites. Seems to fit the prog/left/MSM more than ever now.

It's all funny, but only because I have to laugh or I'll cry. Like many, I never was a Trump supporter but I do like winning. Can't wait for the next SCOTUS appointment! The left will go absolutely ape-shit!

If only the leftys would get their news from other sources than MSM. I doubt that will happen because they like being fed their special narrative so they can feel superior in their own collective minds.

Every day is a fresh reminder that President Trump is much more than initially met the eye. His unorthodox forms of communication seem more and more to be exactly what are needed, even when they sometimes appear unseemly. Politics is rough and tumble. He's a battler--for us. God bless and keep him safe.

You are correct @ Stilton. After taking an antacid and a shot of Black Velvet, I forced myself to peruse several liberal media sites. CNN, MSNBC, Salon, Media Matters, and Daily KOS all mention absolutely nothing about the Lynch/Podesta controversy or anything positive about Trump's accomplishments.
Unbelievable.

About 2 years ago I 'cut the cord' - I was sick and tired of paying for crap I didn't want or watch - especially since cable subscribers are the sole source of income for some the channels. Look at what's happening to ESPN - that can happen to CNN and MSNBC too... Oh, that Shemp guy on Fox news can stuff it too.

I don't miss it, I save about $1300/year and I do not want for video entertainment thanks to Roku, Netflix, and Amazon Prime

@TrickyRicky - My old Samsung 5s had infrared that could be used to control TVs. It was great for changing channels and volume in waiting rooms. Newer models don't have it anymore, but there's got to be similar discrete devices.

For all the left's ranting about Faux News, they don't realize they are just as (if not more) blinded by following CNN and MSNBC.

@Tracy I loved that feature in my Samsung and keep my old cellphone around to watch video while I work and also use as a remote.

The iPhone beats the crap out of it in battery life, but that old phone is still great.

@Tracy Evans, nearly 3 years ago we did the same for several reasons:

One, was that we'd sit down in the evening and scroll through the hundred-plus channels we were subscribed to and would find absolutely nothing worthy of our attention. Most of it was crap.

Two, was the money we were wasting on this. Rates, even for our "basic" package were being raised often twice a year, and had since eclipsed $100/month, or $1,200/year. That's a lot of money for "crap". And it was "low-def" crap, since I was unwilling to pay even more every month for HD-capable boxes for every tv. Much more for a DVR. And out of the hundred-plus channels, there were only 3 or 4 we consumed regularly.

Three, was strictly on moral grounds. I was offended by the knowledge that the Kardashians were making money from me, even though I never watched their insipid show. Believe it or not, that was my greatest motivating factor in cutting the cord.

We have a DVR (Tablo) that records our free local over-the-air channels. We have Roku boxes on our TVs with Netflix & Sling. Paying a fraction of what we used to. And the Kardashians are denied any more money from me.

Controlling TVs: I actually have a watch that will discretely do that.

“Our trustworthiness today is the same as it was a year ago, before people in high offices started questioning it." —CNN president Jeff Zucker

Wait! Darth Vader Ginsberg, the "Wise Latina Woman," and that Kagan dude voted to uphold Trump's travel ban!? Holy begonias Batman! Of course, the Liberals will win in the end when SCOTUS overturns their own decision in October, approximately the same time the ban expires on its own.

As far as Podesta and Lynch being hauled before Congress to testify, meh... So was Shrillary, and you see the consequences she paid. None. Well, there is that whole losing a presidential election thing, but that was totally her doing, not Congress'.

@Geoff King,
I am truly impressed you put yourself through that ordeal without valium! I think I'd rather be waterboarded.

Ripoff TV... Mrs. muenster and I cut the cord a couple of weeks ago. Direct TV was up to $178/month with only Starz as a premium channel. We bought an Amazon Fire TV package for 89 bucks, and my friend built us an HDTV antenna that works like gangbusters. We are kicking ourselves in the ass for not doing this years ago. Better programming, better picture, fewer commercials, and I don't have 147 shopping channels to wade through. It took DTV about a week to start begging us to come back, offering to cut our fee almost in half, which is still a lot more than they charge new customers. They can stick it! What other business punishes faithful customers with higher rates? Maybe the heroin trade, but that's about it.

@Emmantaler Limburger,
That quote could just as easily come form the mouth of Kim Jong Un or The Ayatollah.


Good one Stilt! I especially liked the brown haired guy with the white bow tie under his nose

As always I enjoyed the comments. Good job ya'll. So good to have a break from the "other side." It is so quiet for a change. I won't hold my breath though.

It is truly an alternate universe.
I think I saw Spock with a goatee...Or something,(haven't seen the original Star Trek for a long time)

This is a must-see:

@Crabby: That was great.

In defense of CNN, here's an example of their brand of top notch investigative journalism which actually disses Øbama - or at least his wardrobe:

Yes @Colby Muenster, and you'd think that would be fodder for the talking heads to explode on CNN. Alas, as @Geoff King points out, they've got more pressing issues to discuss, like how Obama's rocking his jeans.

@Crabby Old Bat, saw that yesterday and love it. Again, I ask why the legislators of California are getting off the hook for letting all their illegal aliens die?

I've considered CNN "unwatchable" for at least the last year. It's hard to imagine CNN becoming more of a joke, but they somehow keep doing it.

Can't do it - just can not do it anymore - as soon as lesser dolt comes on nbc after the local news it's a mad scramble to get to the remote before any thing drops from his lips......
I have recently finally gone over the edge to the point where I might become almost dangerous if forced to watch what they call "news".....

Wish I'd said that!