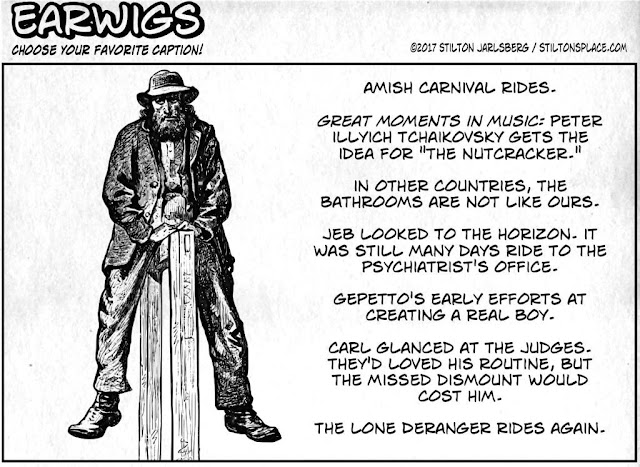 We hope you enjoy the cartoon above, because there was no way we were wading into the morass (not that we're against morass) of the latest news cycle.

Anti-Sharia Law protesters were attacked by Antifa counter-protesters, while LGBT groups took to the streets in support of Islam. We'll note that LGBT folks also take to the streets in Islamic countries, only they start from rooftops.

So instead of dwelling on the depressing stuff above, we're going to share some actual, thoroughly investigated good news to get your Monday morning (and conceivably many other mornings) off to a good start: "Zing Zang" Bloody Mary mix is great.

We discovered this on Saturday morning while attending a dog's birthday party. Bloody Marys were served, though not all of the people (and none of the dogs) in attendance availed themselves of such, apparently under the mistaken belief that when it's 8 a.m. in Texas, it really isn't "5 o'clock somewhere."  We begged to differ, and further pointed out that on the very spot we were standing, it had turned 5 o'clock three hours ago.

You may question our logic, but it's demonstrably sounder than anything else in the news.

Jethro can’t decide if he’s a Democrat or Republican

Your right. Restrooms in foreign countries leave a lot to be desired. I spent 18 months in Eritrea in the early 70's. Most bars had a room off to the side with a hole in the floor. The LGBTQ whatever would have been happy with the one room. No decisions to make.

If you are interested in Comey timeline and work history, this will handle that. Good read and the bottom line is Comey has more to worry about than President Trump:
https://www.reddit.com/r/The_Donald/comments/6ggy2l/everything_you_need_to_know_about_comey_and_his/

I am assuming this is accurate since it is footnoted with published articles.

"Ocean View Property" my ass. Maybe if I stand up.

Well, in spite of the latest nooze, or what passes for news, today's our 43rd anniversary. Yay. Imagine someone putting up with me for 43 years and counting. She's a real saint. And, of course, I love her for it and more.

This is the most unusual cure for crabs I have ever tried.

And BTW, anything that involves tomato juice and bacon can rightfully be considered breakfast, which is appropriate anytime.

Q. What do you see when you look down a mole hole?
A. Molasses. (An obvious reference to your opening sentence)

@Fred Happy anniversary and here's to wishing you many more!

As far as a Bloody Mary (or twelve) I am a huge fan, but I hate, hate, hate celery. I ask them to keep the dang greenery to themselves and throw in an extra stick of bacon or something.

Also, no lime in mine. I prefer just tomato juice and vodka.

American Airlines made the mistake of allowing me in First Class (only once, the learn quickly) and I decided to celebrate with a Bloody Mary. How they managed to screw it up with lime, 300 pound of ice in a tiny cup and not bothering to stir the thing at all I'll never understand.

It was all I could do to choke down ten more.

If anyone hasn't seen it yet, another good antidote to the normal news spin cycle would be Mandy Harvey's audition performance on America's Got Talent this year. Moments like this almost tempt me to watch the show.

Remember, you can't drink all day if you don't start in the morning!

Now that's my idea of a nutritionally complete smoothie. Veggies, protein, fiber and fruit all in one glass.

• But they said they wanted to borrow the ladder for just a minute
• Beware of Chinese-made Viagra™
• Ol' Ernie never got the hang of the limbo thing
• Winslow decided that hurdles needed to be standardized
• Ex-corporal Smith hated these veteran reunions back at the obstacle course
• Bert hated tsunamis
• Upon reflection, Harvey decided that building the doorway before the walls was a bad idea
• Bill waited patiently while Jack figured out how to make the noose
etc.

Good ones, Stilton (and others)! At the risk of sounding like a know-it-all, that picture shows what was a routine punishment in the military back in the 1700's, and likely further back than that. It was called riding the rail. Screw up, and you got to get on there for a pre-defined amount of time, depending on the level of screw up. If you really screwed up, they would tie weights to your feet and kick your legs to throw you off balance. This I learned watching a French/Indian War re-enactment at Fort Dobbs.

Doc it's too damned hard so far to even attempt to put words that match yours on todays Earwigs.

While I no longer imbibe (for the good of mankind) I certainly have no problems with others who do and I certainly encourage the bloody Mary with bacon for breakfast - It is for the good of mankind and womankind too.
Bacon, like garlic to a vampire, drives away evil spirits like vegans and muzzies.
Alcohol also drives aways muzzie and annoying puritans.
So if ya see me somewheres in Texas (or Heavens forbid Oklahoma- check and make sure I have not been kidnapped- please) Please stand close by some bright shiny morning and we will watch the sun rise while you chase away evil spirits.......
Please do!

@Readers- I'm enjoying the casual comments about breakfast libations, 18th century tortures, and of course the various punchlines you're coming up with for the cartoon. DougM, I note that you can crank these things out assembly line style, which comes as no surprise - you're a funny guy! Lots of other good ones, too!

And yes, I saw the Mandy Harvey audition on America's Got Talent (well, the Youtube version) and it was wonderful. For anyone who missed it, and would like to be sporting a grin and feeling better about life 8 minutes from now, here's her delightful performance.

mmmm Bacon! Is there nothing it can't do? That story reminds me of the song 'Bloody Mary Morning', a live Willie Nelson favourite from way back.

ZingZang is excellent, but does not play well w/ cherry vodka...
Gonna have to try a bloody Mary w/ the bacon!

Post bum: You know he didn't get there by himself, he doesn't belong there, he doesn't know what to do while he's up there, and you just want to help the poor stupid guy get down.

Anti-Sharia Law protesters vs Antifa counter-protesters: IMHO, being "anti-Sharia law" is completely pointless. Nobody ever actually votes in Sharia law. It happens through osmosis through an unwillingness to enforce existing law. It's already happening here. We even have medical professionals conducting clitorectomies in America. It happens when a certain community becomes large enough and hostile enough to western culture and law enforcement that said culture and law enforcement loses the will to police that community. The community fills in that vacuum with its own social order. From there, grows from there like cancer.

I've long argued that if as "conservatives" we really want to put a stop to this, we should in fact endorse it. After all, there is nothing the left hates more than conservatives, and anything conservatives like. So I think that the "alt-right" movement should align itself with mass Muslim immigration, since they theoretically have so much in common, like a hatred of Jews, homosexuality, women, etc. Let them tie the left up in knots.

Comey: The guy who supposedly kept and leaked notes on everything, except Hillary's interview.

Took your recommendation on the "Zing Zang" bloody mary mix. YOWSA!!!!! That be GOOHDD schtuff---!!!!

And the Washington Swamp Circus continues...

"Bob hoped to God that Jumbo does not choose to jump off the teeter-totter."

And, with a tip of the hat to cousin Colby: "Fly United, or rail.... The choice is obvious: I'll ride the rail."

Bloody Mary's of any sort are breakfast food. As the day progresses, the mixers (contaminants, some would say) must wane.

@John: I'm sure Sharia is being practiced in pockets of Dearbornistan and environs. What local law enforcement does not see or hear about does not get prosecuted, and the adherents of the moon worshiping murder cult that would take part in such surely isn't telling any outsiders about it. Plus, with a muslim chief of police, and many muslim officers, who is to say that they don't have a compliant police force? (Ah, conspiracy theories abound!) Just another muslim girl gone mysteriously missing; just another "accident" that took some muslim guy's hand. My! You have a lot of "daughters, sir!...

@Emmentaler Limburger, exactly. Michigan, Dearborn or where-ever can pass all the anti-Sharia laws they like, and it would not stop any of this because once law enforcement looses their gonads and cedes any pretense of enforcement, others will step in.

The Sessions hearing - So let me get this straight:

Last year, Trump suggests that fraud and interference in the election, and the left calls him insane.

This year, the same people say that the election was tampered with by the Russians.

Historically, the left has been against any efforts to ensure that our elections are conducted in a honest, fair manner. Doing absolutely anything risks "disenfranchising" voters.

But now we hear that Russia has attempted to do just that.

Democrats, just how do you expect to square this circle?