We'll Get Hat Mail For This 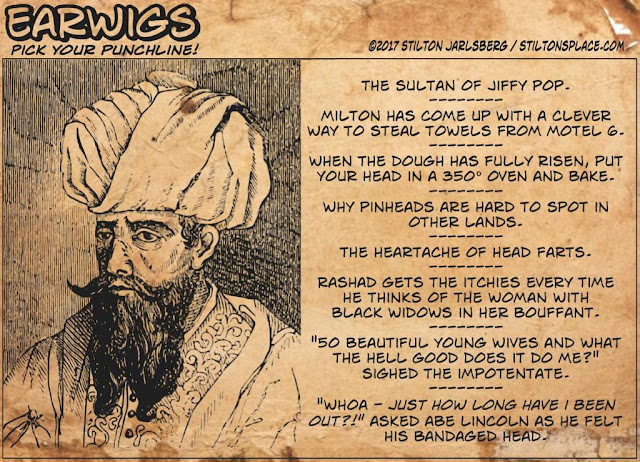 Yes, it's another "free association" Earwigs day here at Stilton's Place! There are some things happening on the home front that are keeping us from being able to really focus - and besides, wouldn't we all really just enjoy a few simple laughs on a Friday?

Perhaps because some of these most recent sex scandals don't really have a lot of zing to them. Owl-faced Garrison Keillor hugged a woman and his hand briefly touched her bare back?! Give us a break. Back in old Hollywood, comedian Fatty Arbuckle was accused of raping a woman to death with a Coke bottle, and more recently actor Bob "Hogan's Heroes" Crane shot hundreds of porn videos of himself with different women until the night he was beaten to death with his own camera. (Which, incidentally, would be a lot harder to do in the age of the iPhone.)

We might also have written about North Korea's new ballistic missile that can theoretically nuke anyone in the United States...or easily cause an EMP event which would kill off 90% of Americans through starvation and disease (as could John Conyers boxer shorts). But hey - is THAT what anyone wants to hear about on a perfectly nice Friday?! We think not.

So instead, we've got the Earwigs cartoon and a very important request: Please help us wish "Happy Birthday" to the lovely (and loved) Mrs. Jarlsberg today! Absolutely no one of AARP age should look as good as she does!

Well Happy Birthday to Mrs. Jarlesberg. Make sure you treat her well on this special day!

I'd beret-te you for your headline, but then, everyone would try to top it!
Wish the missus a happy birthday!

Fatty Arbucle crushed a woman to death with his enormous weight. What's with this Coke bottle fake news?

Wishing a very happy birthday to Mrs J. Hope you have a great one!

Happy birthday Mrs. J. Is AARP age when they start sending letters wanting you to join. If it is than in March I will be AARP + 20. New way of saying I'm getting old.

Happy birthday, Mrs. J! And many, many more happy ones!

Congratulations Mrs J. May you enjoy the day and many many more birthdays.

Gawd! Stilt, you're a god. Thanks again.

The way that the law is set up is this; If you are accused of Sexual Affront in the workplace, school or church and the accuser refuses to elucidate, then you have no chance to defend. You cannot say, "I didn't do it." You can't say, "I don't understand." You do not even have the right to know the identity of your accuser nor the nature of the accusation against you.

It is a thing that we don't talk about but please be assured that an accuser can profit mightily whether the accusation is valid or not. In some cases of bosses, accusers retain their pay (for life) but are told, "Never darken our corporate door again."

That means that they are paid for accusation whether true or untrue.

Happy Birthday Mrs. Jarlsberg
Mrs Rem had a birthday on the 27 and my brother is today.
Cold February nights long ago I guess ........

May your future together with Stilton be as bright as your dreams.

On the subject of Kim Jong Un-intelligent destroying our country and killing 90% of us with an EMP strike, that prediction is next to impossible and actually is based on a science fiction book called "One Second After":

If fatboy actually has the technology to launch a thermonuclear device and accurately detonate it at the correct altitude somewhere near the exact center of our country without our shooting it down first, it would have to be an enormous size warhead to impact everything from coast to coast. We, ourselves, may not have that level of technology.
Even if the Pyongyang Doughboy managed to pull off that magic trick, it is doubtful that everything would be knocked out. For one thing, NORAD and all of our missle silos and defense systems are fully protected against such a scenario, so our response would almost certainly turn all of North Korea into a deep pit of smoking radioactive ash. KJU must know that, so the only question that remains is "how suicidal is the pudgy clown?".

HAPPY BIRTHDAY!! Mrs. J! May this and the next 147 birthdays be wonderful! After that...take it easy.

Best wishes for a Happy Birthday to Mrs. J.

No doubt. Mine BD was the 24th of November. Parents married February 2.

That's Happy Birthday to You in Internet shorthand! :-)

Happy Birthday Mrs. Jarlsberg. Thanks for occasionally loaning the Mr. and his humor to us.

Happy B-day, Mrs. J. May you live a long and fruitful life.

Best of wishes on the Birthday Mrs. J... and many more to come.

I, however, have a more uplifting viewpoint...HAPPY BIRTHDAY! now open the presents!

Mrs J...best wishes for many, many happy days ahead!

Happy Happy Mrs Jarlsberg and wishing you many many more.

Happy birthday Mrs. J. You are, without a doubt, my favorite saint.

The Habitat for Humanity calendar in the office says she shares her birth date with Islam's Prophet.
Hopefully, that's all they got in common. Especially after your house 'remodeling'.

Have a joyous birthday, Mrs. J. As I say on every birthday of mine, I don't mind getting older as long as I stay on the green side of the grass.

"Happy Birthday" to the lovely (and loved) Mrs. Jarlsberg
I love copy & paste

Really can't improve on "The sultan of Jiffy Pop".

The Sexual Harassment Witch Hunt: Do note that the only Democrats that will be targeted for sacrifice will be those who are either done and of no future value (The Clintons) or who would be easily and quickly replaced by another Democrat should they be forced to resign. (Franken, Conyers) Anyone in a still-powerful position will remain immune.

For example, Garrison Keillor (now retired) is out for a single instance of touching a bare-back, but I bet the Democrats will rally behind creepy uncle touchy-feely Joe Biden, who remains in the wings to jump in and save the party as their only remaining "adult in the room".

The Nork EMP: As an investor, I'm always looking for the upside of any scenario. The upside of the Norks sending us technologically back 100 years is that it would quickly thin out the population of useless people in our economy; largely the highly-educated SJW crowd who know everything, and yet have absolutely no practical life skills whatsoever. Those of us who know how to engineer, build, fix, hunt and farm will survive. It won't be comfortable by any means, but it will be survivable.

Speaking of investment opportunities: So it looks like the FBI's got Micheal Flynn by the balls. Probably for double-parking outside the Russian embassy. For a few moments this morning, the stock market took a 2% hit as Democrats went hysterical. This is what people like me call "a buying opportunity" as we adjust our retirement portfolios. So thank you, hysterical Democrats for putting stocks on sale this morning!

And finally, Happy Birthday Mrs. J., and thank you for being the partner that keeps Mr. J. viable and entertaining.

Gratulerer med dagen Fru. Jarlsberg! Sorry about that, but after all, Jarlsberg IS Norwegian.

A very Happy Birthday to the fine Mrs. Jarlsberg. May you have many more!
jack

Birthdays are good for you, the more you have, the longer you'll live!
/Grandpa, who lived to be almost 90 (missed by a month)
So best wishes for many more for both of you...

Have not had JPop in ages, microwaves have pretty much replaced it, but it is still available. Or was recently.

Jason Anyone - "Let's do the head wrap AGAIIINNN!!!

As someone who has worn a turban (historical cosplay, I liked the turban / sash look) it's a process - iron 18 ft of fabric to get it flat. Fold sides to center, iron again to set edge. Roll it up, backwards, so you can unwrap it as you wind... Then wrap your noggin'.. The nice part, it was cooling and absorbent in TX heat, especially if one added ice to the top...

Mrs. J...
My warmest wishes for a great birthday. Stilt, with your house still semi-finished this would be a wonderful time to take your bride OUT for wonderful dinner and a lot of special attention.
Dick Paetzke

On a side note, presenting "Cheap (Democrat) Tricks"

Happy Birthday, Mrs J.
(Why's Stilton bein' so considerate? How bad did he screw up?)

Okay, free association:
• And I'm also a client.
• Every time I get into the shower, somebody knocks on the door.

Happy B-Day, Lady Cheese ! As my sainted Mother used to tell me " Son, it ain't the years, it's the miles."

@Readers- Many thanks for all the birthday wishes. I wouldn't be able to function in this world without Mrs. J's wisdom, humor, and seemingly endless patience. And she didn't get spoiled MUCH on her birthday, but she did get a grocery store carrot cake and a helium balloon which scares the hell out of Penny. And, oh yeah, $5000 worth of new plantation shutters!

Stilton, Stilton! Lucky for you your audience leans to the right. Otherwise, do you realize how many Safe Spaces would have had to go to full "State of Emergency" with your cavalier mention of your white supremacist "plantation shutters"? Hell, ABC's t-bone of the market on Friday would look like a hangnail compared to all the whiplashed Liberati. Hell, even the unemployed call in sick from stuff like that.

You say Keillor is owl-faced? To me, he looked like a Pekinese.

The Sultan of Swing.
Happy belated Birthday to the Lady of the renovated palace.