Proving once again that she has way, way too much time on her hands, Alexandria Ontario-Canadez is now complaining that a US Capitol Building statue of Father Damien, a Catholic priest who devoted his life to caring for the wretched residents of a leper colony in Hawaii before contracting and dying of the illness himself, represents "patriarchy and white supremacist culture."

The fact that Father Damien was a racist asshole no doubt comes as a shock to the Catholic church, which made him a saint, as well as to Hawaiian historians who are aware that Hawaii's Princess Lili'uokalani visited the leper colony on Molokai to personally honor the selfless priest. In 2009, then-governor of Hawaii Linda Lingle proclaimed October 11 to be Saint Damien Day, to celebrate a man who "remains a spiritual hero and an icon of love, compassion, courage, humility and humanitarian service."

None of which, in AOC's unforgiving eyes, excuses him for being white.

Joe "Who's Joe Biden?" Biden will reportedly name his choice for a VP candidate sometime this week. Or maybe next week.

Okay, the timetable is fuzzy but he's got a reminder written in bold, block letters on a Post-it note so it will definitely happen pretty soon. Probably. 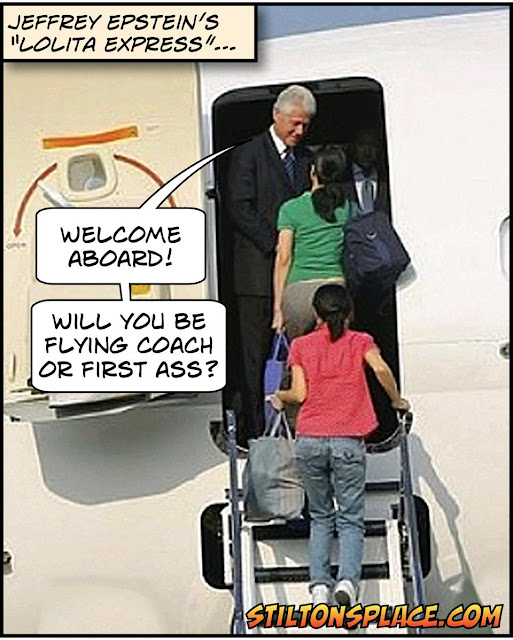 According to newly-released documents, Bill Clinton did indeed spend time on Jeffrey Epstein's so-called "Pedophile Island" in the company of "young girls."

The former president, fabled hound dog, and pathological liar has adamantly denied any wrongdoing, shaking his stink-finger for emphasis. According to unconfirmed sources, Slick Willy has said "If I ever was on the island, and I'm not saying I was, it would have been because of my  well-documented interest in gardening." When pressed to be more specific, Clinton replied "deflowering."
Posted by Stilton Jarlsberg at 12:01 AM

AOC is sounding more and more like an idiot (not that she didn't already sound like one) since her handler and minder cut loose and ran before charges could be filed on him for fraud with campaign money. Her being the mouthpiece for Socialism amongst the younger voters she had to be fed what she was supposed to say. She's an actress/bartender who couldn't memorize her lines to save her life. Now she's got a taste for power and money it's going to be hard to pry her out of there. And she did audition for the "role", and has admitted to it.

Let's put Slick Willie and her on a plane to Lolita Island and see what comes up....And, the well known follicle inspector and brassiere adjuster, Joseph The Biden, needs to be plugged into some 440v/3 phase AC he so desperately needs to jog his memory and loosen his bowels, seeing how he always looks like he needs to take a dump.....


What's the age of consent in USVI?

"Proving once again that she has way, way too much time on her hands.."

Or a sad, pathological need for attention.

Excellent, you are on fire today!

Watching the nooze this past week has made me feel once again the need for a "Night of the Long Knives". It's way past due. 'Nuff said, sigh...........

The Democratic Party: True proof that there *IS* a sucker born every minute. :P

@Edam. In my town, there is a light pole about every 50 feet. Lowes and Home Depot have miles of rope on spools. It's not for lack of equipment. It's our lack of will.

Stilton, your short sabbatical must have been refreshing. Your commentaries today are concise and stinging.

Regarding AOC, please remember that Bite Me has said she will be in charge of energy policy in his administration. Let that sink in. The lifeblood of our world, oil and gas strangled. Commentators such as Hannity and about everyone else rightfully talk about huge job losses in the industry. What about electricity for 4 or 5 hours a day, if that? No food on the grocery store shelves. No heating or AC. Does anyone in this spoilt, dumb-ass society understand the implications?

Bill Gates and his fellow globalists can almost see the world population declining by half in less than a decade. This prospect makes them salivate.

Believe it or not, AOC is a rare gift. She's too stupid & ignorant to have a filter appropriate to her position. That means that she's transparently honest about the methods and goals of the Progressive agenda. She "shoots from the hip", which is just another way of saying that when she speaks, it's fueled by emotional impulses instead of any critical thought given to any particular issue. She's a wonderful proxy for modern, young millennial Progressives who have supposedly been the educated and certificated at great expense and are convinced that they have all the answers, and yet have taken away very little real knowledge, skills, or education that are of any use in the real world. She's only suited for Congress because she has no skills that are of much of a value in the private sector economy.

Instead of getting her booted, we should be donating to her campaign to keep her in office and front-and-center. Losing re-election would only result in her being replaced by a more competent far-left Progressive.

Biden's Presidential Pick: There, fixed it for you.

Bill "I did not have inappropriate relations with that woman" Clinton: Well, again that statement would be true. After all, these girls were hardly old enough to be considered "women".

@John the Econ. Again, I like the way you think. AOC is already well ahead of any ideas such as naming Daffy Duck as Biden's spokesman.

The speculation about her becoming the Veep selection is fun to watch! Slo Quid Pro Joe is needing additional programming (shock treatment? Perhaps...) so he won't screw up the announcement when he finally wakes up for more than 3 continuous minutes.

It isn't Biden's pick. He is too far out of it to pick anything but his nose. This is the DNC pick and no doubt there is lots of fighting going on between the crazies at the DNC. No doubt, many of them want Maxine Waters, while others want Nutjob Gretchen Whitmer except she isn't black, others no doubt want Oprah Winfrey, while others want Big Mike. None of whom are even as qualified as Dementia Joe.

As BJ and "Ma Barker" Clinton have said repeatedly:
Rules are for thee, not for me.

Great comment on Clinton. So true. Monica was how many years younger?

Brilliant cartoons, and commentary..
Apparently the ONLY qualifications for VP are (percieved) gender, and skin color.
But supposedly, we're the racist sexists...

Whitmore might actually gain him votes in MI, most of us want her GONE..

Hawai'i chose to put Father Damien's statue in Statuary Hall. AOC isn't from Hawai'i, she's a New Yawker. She should just butt out.

And since when does Slick Willie need consent?

@Regnad Kcin: When I first saw your moniker, I kept thinking, "Regnad Kcin, Regnad Kcin, Why does that name seem so familiar?" Then I remembered that name was on a glass window in a door and seen backward. Nick Danger! Third Eye! I'm all better now...

@Readers- No time at the moment for me to respond to individual comments, but I'm lovin' them!

When is AOC going to give New York back to the Dutch?

sat down with a young twenty something person espousing to be a "collage graduate" with degrees in education, gender studies and mathematics. she had difficulties making change for my meal at burger king. over a coffee, I asked her what she knew how to do to which she started to tell me what she studies. so, I asked her a trick question: if she had a car how she would go about replacing a flat tire on a deserted road in the middle of MOAB with no cell phone service. she would call AAA. Ok. superior product of our education system.
were I hiring for my company, I would not hire anyone younger than forty five years of age for any position. that would leave AOC behind the bar looking in her empty tip jar.

@ringgo1 : You win one dollar... would you like to try for two or what's behind the curtain ?

@ Capt fast: I too have had some eye-rolling moments with the up and coming generation. Partly generational, but mostly for reasons you describe. A seemingly total lack of useful knowledge.

@Regnad Kcin: I'll take what's behind the curtain, or a bag of sugar. Just as long as I don't walk into the side of a brownstone building.

@Jeep: "Don't eat with your HANDS, son! Use your entrenching tool!"