A Meme Thing To Do

Initially we hadn't given much thought to the whole brouhaha in which Trump tweeted (sigh...) an animated GIF of him pretending to rough up someone with a CNN logo for a face. It was a dopey little animation which sort of made a humorous point, after which we could all just get on with our lives - right?

Wrong. The media and Internet went nuts (granted, this is a given these days), making an occurrence which had roughly the importance of a gnat's fart into a bigger story than the lunatic leader of North Korea successfully test firing a nuke-capable ICBM missile.

CNN was especially culpable in blowing the loco logo story out of proportion. They claimed that the seconds-long clip was a call for violence against their esteemed journalistic team, and then tracked down the poor schmuck who'd originally created the animation and threatened to out his real identity (after labeling him a racist and anti-semite) so that the angry leftist mobs - you know, the ones who commit real acts of violence - could deal with him.

This is no small thing, as conservative cartoonist (and personal friend) Mike Lester points out... 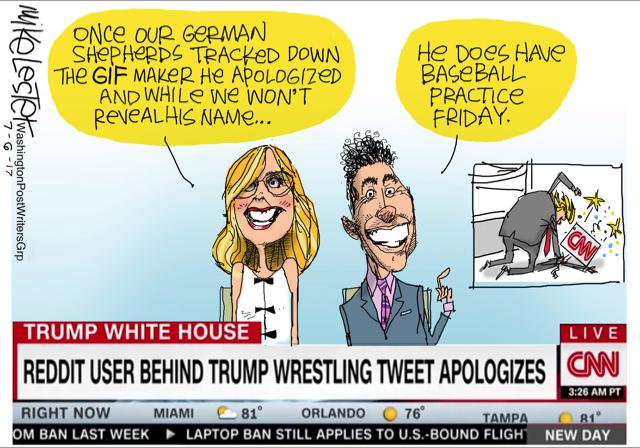 The Right, of course, responded with a tidal wave of new memes (including our winged-hat tip to Thor and Hulk) in which CNN was humorously and entirely metaphorically getting the stew beaten out of them.

These weren't "calls for violence," but rather a perfect Free Speech counterattack in defense of a private citizen whose rights and safety were being threatened by a mega-media corporation that can't take a joke - even though it is one.

The Trump/CNN gif was silly and crudely done. CNN brought this whole tidal wave of scorn on their own heads by not ignoring it completely.

Greywuff, I saw that one done this morning already. Sorry, don't have a link for it as I saw it in passing (along with so many others)

This was good for a few chuckles.

And here was my response to the Thug News Network.

I am not sure why the thin skinned CNN basket cases are offended by such a minor gig.
The real violence directed toward our President does not offend them though it mightily offends a lot of folks such as myself. I wonder how funny the comedienne thought her visit from the SS was? Meanwhile, although President Trump is treated as Royalty in other countries, ours have not a clue to how great this man will be. Why the left insist on girly men or women to be president is even beyond Freud.

A "news" organization? Phhhtttttttt! CNN is what put The Jerry Springer Show out of business.

If there is a real call to violence to urinalist ---I think they will know it - it will come to them in a flash - until then it's time to do a few days anniversary special on a missing Malaysian plane I think.

And yet there are still those who consider That Network their source for news and opinion.... Wonder if Alisyn Camerota rues the day she decided to leave Fox News?

@Fish out of water - not likely. She was never a conservative anyway.

A real LOL cartoon.
Once again CNN proves their credibility as a "news" outlet by being over the top nuts.

CNN is dying fast. They now have been beat out by Nick at Night in primetime ratings. Seems more viewers would rather watch old sitcom reruns and cartoons than their brand of drivel:

CNN needs to die - at least a near death experience - so they can regain some credibility. Right now, reporters seem to thing they are all knowing and what they say is gospel. At some point, they need to wake up.

CNN and its operatives are the very ones that are always crying and screaming about "bullying." Anyone having lived long enough knows the cure for "bullying"...that being a good ass beating for the perp! Works every time and CNN has had a whole can of whoop ass opened on them by themselves.

CNN, the most Busted name in News.

all of the "news" networks, including print and internet, have ceased being news and have become opinion or, to quote the idiotic Bill O'Reilly, "news analysis". focusing on CNN or ESPN is missing the forest for the trees.

Ya know, after a little thought, CNN has to do this as being a Ted Turner creation then getting input from that great American Traitor Jane Fonda, they can't help themselves.
One of my hopes is to live long enough to urinate used Scotch on their graves. Meanwhile, loving the cartoons, dead on.

I seriously have to wonder what is going on at CNN. Is there any adult supervision there at all? Is this the hill they've chosen to die on? Or is CNN actually run by evil geniuses and this seemingly insipid brouhaha over a GIF just intended to get our attention off of the multiple fake news scandals that involving CNN being a tool of a failing Democratic Party.

So once again we get the absurd narrative that just like a Confederate Flag painted on top of a car in a 35-year-old TV show is going to incite people to violence against blacks, an animated graphic with Trump's head and the CNN logo is going to create an open season on journalists. So supposedly fearing this, CNN goes on the offensive and issues a threat against some kid blogger. Good move, CNN; You're now at war with the Internet. I know the folks at CNN honestly think they're the smartest people in the world. They're not. And this bonehead move is certain proof. Not only are they not the smartest people in the world, they're now losing to 15-year-olds as well as to Trump.

Meanwhile, there's everything that CNN is ignoring as they fight for what is the rest of their relevance. I still hear no call for the censoring hip-hop thug entertainment and culture as Democratic voters in Democratic cities continue to actually kill each other in record numbers. It's just a bunch of black people on the south side. Who cares? The real problem is that people don't like CNN anymore.

It's not just CNN. It's that the "news media" and the Dems are so filled with hate about Americans electing President Trump instead of their criminal that the viciousness will not end. The Dems in Congress, the dark state embedded Dems, and even our usual FBI, NSA, CIA , etc., are involved.

As one small example. I often judge a place to get a meal and some road "coffee" by what's on the wide screen. If the Weather channel or Fox news, I stay. If it's CNN I move along or ask to change the channel; and I tell the manager why. The rant/fake news networks & late night monologs are never watched at home now unless I want to briefly see what form the propaganda is taking over a particular event. It often doesn't even resemble real events. Networks need to be reminded if they lose us with the "news", most their remaining crap programming is not going to get us back. I've gone to pleasant free-choice audio instead. I've made the same decision about David Muir & ABC evening ABS news. Their news programming is now even worse than what my son described long time ago as "Four Victims and a Puppy". Now they have an enemy in Trump, and therefore US. I realize Muir is just the smug talking face, not who's really behind it.

In print: Note the byline. If the source is Washington Post or NY Times et al (as it so often is) just skip it. It's not much news and a lot of biased opinion.

As possible and as I have time, we will be expanding boycott to sponsors as well, bundled media feeds, etc. This has become a situation these Markists etc. count heavily on the majority us not paying enough attention & not making the effort.

I still wish more was known, or maybe I just need to discover and learn it: How & where coordinated domestic COLLUSIVE hate programing is originated and produced so rapidly and consistently to reach all these outlets.

Are these people 12 years old? David Brinkley, Chet Huntley and our dear old Walter Cronkite would spin in their journalistic graves at these twits.

"I still wish more was known, or maybe I just need to discover and learn it: How & where coordinated domestic COLLUSIVE hate programing is originated and produced so rapidly and consistently to reach all these outlets. "

I'm thinking.... the DNC. Most networks get their marching orders from them, y'know.