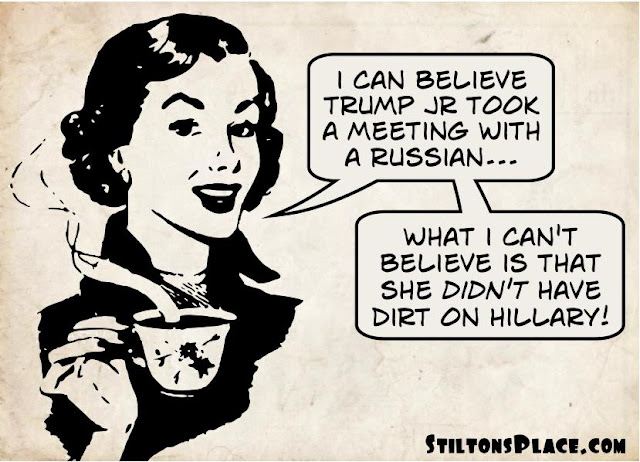 We're not delving deeply into the latest developments of this cockeyed non-story, but we just thought it was worth mentioning that Natalia Veselnitskaya, the Russian attorney with whom Donald Trump Jr. briefly met, must have been living in a Siberian cave for the last couple of decades if she wasn't able to offer up some plausible dirt on Hillary.

Seriously, if we'd met with Trump Jr, we could have talked for hours about Hillary's myriad scandals and misdeeds. The fact that Veselnitskaya couldn't and didn't only lends additional credibility to the idea that she was more likely an operative representing Loretta Lynch and Barack Obama than Vladimir Putin.

BONUS: MIND IN THE GUTTER

First things first: we're not making a joke at the expense of the Special Olympics. We have good friends who are participants and we've celebrated their impressive accomplishments.

We're not even making a joke about Michelle Obama, who was at the Espy Awards presenting the Arthur Ashe Courage Award to the late Eunice Kennedy Shriver in honor of the work she did in founding the Special Olympics and working with those who have special needs. The former first lady did a fine job, and the cause was deserving.

What we are having a bit of trouble with is again associating the Obama name with the Special Olympics after Barack, that smug and smarmy SOB, once likened his bowling ability to that of Special Olympics participants as a cheap shot to get laughs.

Not a major story, certainly - but as we head into the weekend, isn't it nice to appreciate the fact that neither Hillary nor Barry is in the White House these days?
Posted by Stilton Jarlsberg at 12:01 AM

Yes, it is wonderful that barry and company aren't still in the White House but he is still doing his best to muck up the works. And I am being kind with my words. I will be so glad when he becomes a non person just like some former Russian leaders of days gone by. Only old folks and history buffs will know the reference.

That's actually an astute observation. The meeting was nothing.

This whole Russian thing is "much ado about nothing". I'm SICK of hearing about it. As Trump has finally pointed out....why would Russia want him instead of HRC as our president? That has never made any sense to me.
As for the former president and the Clintons, the sooner the media stops talking about them, the better. If we don't have to hear about them all the time, maybe they'll fade away into history's archives.

Who better to honor Special Olympic's athletes than a woman(?) Who looks like she could bench press a Volkswagen?

I see Hilliary every morning, when I back-up to the mirror after my shower. The smile is there and I say to myself, Dam, I'm glad she's not President....

Obama also golfed like a spazoid but this was never reported by the press because they always sought to “improve his lie” both on and off the course.

the DC Swamp critters are not limited by political party ...... at least 80% of Con-gress is in the lobbyist's money muck.

She only claimed to have dirt on Hillary as a pretense to get the meeting, and Trump amateur fell for it. It was even dumber, because just what kind of "dirt" would have made any difference? They already had dirt on Hillary going back over 40 years that in any sane universe should have been enough to put her in prison, much less a viable candidate for President. More "dirt" at that point would have been a waste of time.

As I said the other day, the what the media should be interested in is why Natalia Veselnitskaya, who today they today regarde as a pivotal character in the collapse of the republic got a fast pass through immigration courtesy of the ironically-named Obama Justice Department.

@Judi King, indeed! Do they really think they can erase the fact that it was Hillary networking and doing deals with the Russians while Bill went around giving them $500,000 speeches? Because that's how they act.

Secondly, this took place in June '16 when according to the polls President Trump was going to get trounced. I think that was the bait. But it was still a bait and switch operation. Secondly, Don jr was a private citizen and still is as he has no position in the Trump administration as he is running the Trump empire.

Lastly, this gal is neck deep in with the democrats. She has got some pull to be able to overstay her temporary visa by 6 months. On the bright side, this may be enough to kick off an FBI investigation to all Russian ties and alliances once we get the new director. And on that, he had to say the current investigation was fine. No choice there.

I am doing my darnedest to Just Say No to all things Obama, but they just won't go away. My only thought about Michelle's appearance at the Special Olympics award event was ... WHY can't that woman buy undies that fit?! She's wearing a gorgeous gown ... under which are multiple bulges created by her ill-fitting bra and panties.

@ Chrissy T: To find things that fit better maybe the Mooch should try a western & rodeo supply house... the tack section. Yeah I'm bit shamed to even comment about those two, but couldn't help it.

Maybe Veselnitskaya could run through a rain forest blindfolded and not hit a tree. Actually, it probably never occurred to her that dirt on the Clintons may be some top secret, well disguised, juicy tidbit. Russians most likely assume ALL Americans know what an evil, foul, traitorous, douchebag Hillary is, so there's no need to point out the obvious.

Concerning the never ending chain of Obama "news" coverage, get used to it folks. The moonbat world is clinging to them like Linus' blanket.

Oh! I forgot to send my sympathies to Thomas Beechler. It must be truly horrible to have an ass that looks like Hillary! Please keep it covered at all times, sir!

I remember the former president's (LOVE saying that!) bowling comment. The Champ bowler for Special Olympics, who carries like a 270 average, offered to come give him lessons. Proving that not only is he the better athlete, but also a better person.

I'll just leave this here, and my apologies to Jim Henson and the Muppets.

@Readers- Sorry I can't respond to all the comments right now, although lots of good points raised above!

... WHY can't that woman buy undies that fit?! She's wearing a gorgeous gown ... under which are multiple bulges created by her ill-fitting bra and panties.

1) The makers of women's undergarments tend to make the to fit women.

2) perhaps all of the "bulges" aren't created by the underwear?

I can't help but notice that the current FLOTUS doesn't seem to have an issue with this.

Funny how the story changes, yes? I recall that when the Russian Lady Lawyer story broke, it was reported that she had INCRIMINATING information on HRC. But it quickly morphed into her having "political dirt." I suppose that having evidence that a political opponent broke the law IS political dirt. But not all political dirt involves the breaking of laws. Did Junior back away from the "incriminating" claim? Or have our media decided that HRC didn't(couldn't possibly) break any law? Wouldn't ANY American have an interest in evidence that a former Secretary of State and candidate for President broke laws, political opponent or not?