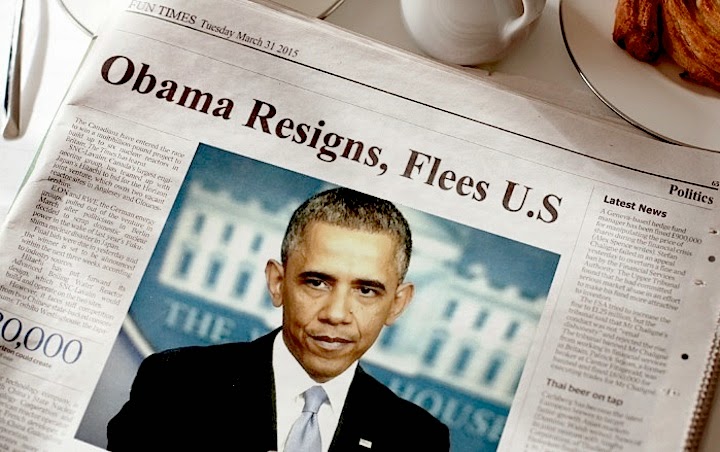 On an unbelievably busy news day, no story is bigger than the shocking resignation of Barack Hussein Obama and his subsequent hasty helicopter escape from the roof of the White House.

Early morning television viewers were surprised to find their programs interrupted for an emergency announcement, during which the ashen-faced and possibly drug-fueled president spoke in rambling, frequently cryptic sentence fragments about "the sweet, sweet call to prayer," "dog-flavored shave ice," the merits of Titleist golf balls and, most puzzlingly, his declaration that "Mike is done pretending to be Michelle." He then told America to go (and we paraphrase here) fornicate itself, and capped his brief resignation with "Allahu Akbar - I'm out of here, suckers!"

In a scene reminiscent of America's departure from Vietnam, Obama scrambled aboard a George Soros-owned helicopter hovering just above the White House roof.  Newly appointed President Biden celebrated his unexpected promotion by rushing onto the White House balcony in his pajamas and firing a shotgun into the sky, before being tackled and disappearing under a pile of Secret Service agents. Sadly, the shotgun blast was thought to have done only minor damage to Mr. Obama's helicopter.

BUT THAT'S NOT ALL - Also in today's news:

• John Kerry triumphantly announced that his negotiations with Iran have been successful and will be officially ratified in a ceremony in which "I'll kneel on a beach while wearing a traditional Iranian document-signing orange jumpsuit."

• A council of Native Americans judged Elizabeth Warren to be guilty of violating tribal law by failing to use "every part of the buffalo." In point of fact, she was using only one part of the buffalo and not, as nature intended, for the purpose of making more buffaloes.

• Pressed for more details about his injury, Harry Reid admitted that "the band that snapped" as he was working out with it was, as many suspected, The Village People.

• A crowd-funded Kickstarter campaign intended to pay for a monument to honor race martyr and cigar liberator Michael Brown fell short of its stated goal today, raising a final tally of only $375. The Ferguson highway department says the funds will be sufficient to create a commemorative speed bump.

• The Supreme Court issued a 5-4 ruling confirming that, despite the controversial and somewhat confusing language in the 17,000 page Obamacare bill, the government will give full "breast exam" reimbursements for every crispy dollar bill men spend in topless clubs.

Yes, if only it were so. Imagine how much better we'd all be.

Good times, good times.
Remember I suggested that we might look back at 2020 as the good old days.

Hey Murph. From your mouth to God's ears.beden is the consummate idot uncle we wish would stay in his attic.

I TOLD Joe that he had to use 00 buck (instead of 7 or 7.5 shot, which might scare some starlings, wake up neighbors or piss off Antifa tent-dwellers camping out in the back yard). At least he didn't use an Assault Shotgun.

I have that one from 2015 printed out and hanging (get it?), framed above my 'puter desk. All great classics deserve to be hung. I see where harris/xiden are traveling in the same plane. Watch out, watch out for nanzi the californication head witch. I see either engine trouble or a large previously unknown mountain in the future. Illegidimi non carborundum.

Its taken a while but the good news is that the Great Divider has been canceled - https://www.rt.com/usa/519779-waukegan-school-obama-racist/
Couldn't happen to a more deserving case!

Lately it's been like "Groudhog Day"
except every day is April Fools' Day instead
and with each day just getting worse.

The world has gone mad. MLB pulls the All Star Game out of Georgia because they now have voting laws that are comparable to at least a dozen other blue states. But they'll continue to do business in fascist China where there is literal slavery and people can't vote at all.

But thanks to @Brie Camembert for posting something that is almost sane: A school that will not be named after Obama for his being a divider. That was refreshing.

It is fun watching the left cancel itself.


@John the Econ, remember--there are NO blue STATES, just blue CITIES. Look at the county-by-county voting map of the US and it's clear as day.

Also, I'm still pissed that the MSM swapped those colors in 2000. Before that, the red cities were all COMMUNIST RED, as they should still be depicted.