Covid variants, including the new and improved "Mu" strain, continue to burn through the Greek alphabet when acquiring names. Which seems appropriate, considering we're all taking the pandemic Greek-style, if you catch our drift.

Fortunately, Mu isn't really prevalent yet because its much-more-popular cousin Delta is pretty much infecting the world right now. It's so infectious that virtually all serious scientists have agreed on the conclusion that we're all going to get it. Fortunately, vaccination seems to make it much less likely that you'll be hospitalized or have serious symptoms, but Covid has been added to the "Death and Taxes" list as something that will now always be with us.

As manmade achievements go, that's pretty damn impressive and is worthy of commemoration. Specifically, we're fatasizing about something that "escapes from a lab" and is accidentally dropped on the Wuhan Institute of Infectious Bat Viruses and Screen Doors. Nothing flashy, really - just something big enough to make the residents of Hiroshima say "Holy crap, I'm glad they didn't drop that on us."

FROM THE VAULT: LABOR DAY PAINS 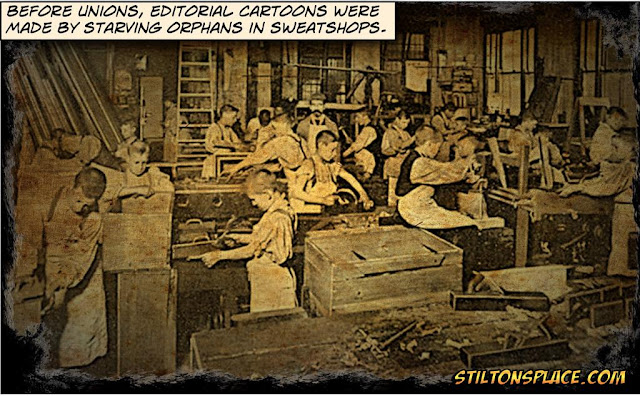 Today we observe Labor Day, a celebration of the unions which gave new freedoms, wealth, and dignity to peons who previously suffered under the cruel oppression of capitalist bastards. Nowhere is this more the case than in the editorial cartooning industry, which has come so far in the past century.

Once considered a "job that Americans won't do," 100 years ago editorial cartoons were farmed out to Irish immigrants and Chinese coolies who were functionally little more than slaves, working at crude drawing tables in return for a weekly ration of potato peels or fish heads.

Later, when the Irish turned to police work and the Chinese turned to ruining SAT scores for everyone else, the greedy editorial cartoon barons put women and children (as young as four years old) into forced servitude, penning cartoons in dingy, airless factories. Their work shifts were 24 hours long, every day except Sunday - when they got 15 minutes off to pee and whimper.

Some died of ink poisoning, others died violently in the process of collecting the ink by milking octopuses, while many simply lost the will to live after being forced to look at grim news items every day.

But then the unions entered the scene and changed everything. The sweatshops were closed, women went back to prostitution, and children were again free to be beggars and pickpockets. But actual editorial cartoonists, now holding the reins of collective bargaining, became the masters of their own fate.

Today, editorial cartoonists are among the most highly paid and respected professionals in our nation, loved by all, desired by beautiful women, and universally sought after for their wit, intelligence, and dashing good looks.

Not to mention their vivid imaginations...

"editorial cartoonists are among the most highly paid and respected professionals in our nation, loved by all, desired by beautiful women, and universally sought after for their wit, intelligence, and dashing good looks."

mu is also the chinese ideogram for "nothing"

it's also used for a pacific ocean version of atlantis.

Mu could also be Mad Cow Disease ...... or does that belong to Rachel Maddow?

Editorial cartoonists are known for their vivid imaginations? Is that what we're calling the DT's now?

"Covid has been added to the "Death and Taxes" list as something that will now always be with us."

Wow! That's horrible! I wish we could turn back the clock and go back to those halcyon days of yesteryear when all we had to worry about was the "common" cold - a coronavirus that didn't have the advantages of a rabid PR system highlighting every cough and sniffle (and yes, death!) it caused.

Considering that the Wuhan Flu has the same effect as a military bio weapon, I second your proposal for dropping a "surprise" on Wuhan. How about Bejing as well?

And from your essay on editorial cartoonists....I think you're ahead of me in celebrations.

Great blast from the past Stilton, always love your archival reboots.

"Greek style" ... your drift was caught.

Welcome back Stilton. We missed you!

According the the power of Google there really is Athing called Mu:

I know that I recently caught MU. It was sudden and vicious, recognized only after finally turning on the tube to mistakenly catch the middle of a CNN broadcast featuring a Biden speech. Symptoms faded immediately after downing a tall vodka margarita. Do you think I should notify Fauci?

I can hardly wait for the "Xi variant" to be named.

= ZARATHUD'S ENLIGHTENMENT =
Before he became a hermit, Zarathud was a young Priest, and took great delight in making fools of his opponents in front of his followers.

One day Zarathud took his students to a pleasant pasture and there he confronted The Sacred Chao while She was contentedly grazing.

"Tell me, you dumb beast." demanded the Priest in his commanding voice, "why don't you do something worthwhile. What is your Purpose in Life, anyway?"

Upon hearing this, absolutely nobody was enlightened. Primarily because nobody could understand Chinese.

* "MU" is the Chinese ideogram for NO-THING

from the principia discordia, or how I found goddess and what I did to her when I found her

We need better Mu jokes. At least with the latest South Africa variant we could remind people to stay 6 feet apartheid.

I like how Fau Chi said today that Mu wasn't anything to be concerned about in the US. Yet. He's always a ray of sunshine, ain't he? "Yet".

Oh, and think about that "vaccines make it much less likely" bit, as "less likely" is par for the entire virus, and becomes even more likely as the newer weaker variants emerge. If you aren't really old, really fat, loaded down with other major health conditions already, you have almost no risk of getting really sick, hospitalized, or dead. The vaccines might shave a tiny bit of that already really tiny risk, in the 4 or 5 months they seem to last.

And for continued Covid fun, look into peptoids, the latest simple treatment from science that appears to be a major antiviral, killing the 'rona, herpes, warts, and nearly every other virus it contacts. And you can't have any. This "new" scientific breakthrough was discovered 35 years ago and then rediscovered 15 months ago and now just found out about again.

Perhaps we should start using the Chinese alphabet.

As long as the chances of hospitalization or death from "the Delta variant" is less than the Mueller report being relevant, I'm not going to be losing any sleep about it.

Labor Day: In my town, you can't throw a fistful of gravel without pelting at least a dozen "help wanted" signs.

Stilt,
Best spew-inducing pun I've run across in a long time
(which was prob'ly one of yours, also)

There was once a man who served in the Greek Navy for 30 years, and then retired. After retirement, he was married to a beautiful, young Greek virgin in a family arranged marriage. Each day the neighbors would look to the balcony railing out side of the newlywed's bedroom to see the traditional "stained sheet" hanging there, signifying consummation of the marriage. Three weeks go by; no sign. So, the bride's mother approaches her daughter privately and asks her, "What is the matter, my daughter? Does not you husband make the love to you?" The daughter answers, "Many times, my mother. But truly, I just can't help shitting afterwards."

At first, I thought mu was short for muon, which is a mysterious sub-atomic particle too small to be observed...just like the brains of too many politicians. I stand corrected.

forget giving the chinese the flu. Lets give them a nuke

@Ringgo1 And there was the Greek sailor who kept on re-enlisting. He just couldn't leave his buddy's behind.

Revolver.news just posted a link to a story:
'Fauci to cattle: “MU”… '