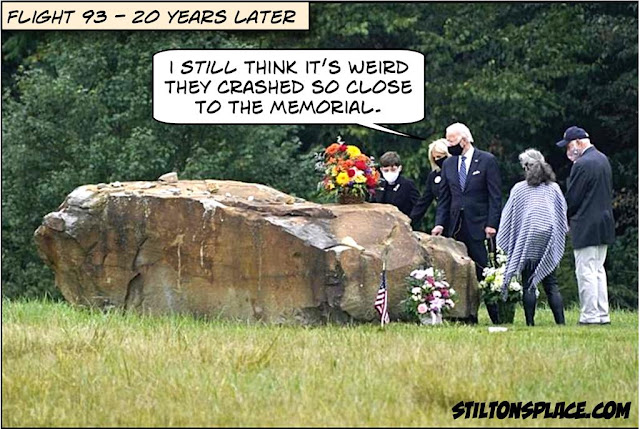 On Saturday, September 11th, Joe Biden very publicly visited the sites where terrorists used American aircraft for devastating attacks on the innocent, clearly hoping that all the ceremony would distract the news media from the fact that the 20th-anniversary gift he gave those terrorists was...more American aircraft.

But giving the bad guys exactly what they want is nothing new for Biden, in part because of what he learned at the hem of Barack Obama's perfectly-creased pants. Because it was Barry who freed five top Taliban terrorists, four of whom are now part of Afghanistan's new Taliban government. Which is, of course, exactly what B. Hussein wanted.

To refresh memories, we've gone back in the vault to show what we had to say at the time Obama made his infamous "prisoner swap"...

FROM THE VAULT: WHAT'S FOR DESERTER

According to news reports (denied by the Pentagon), US Army Sergeant Bowe Berghdahl, who was swapped for five (count 'em!) high-value Taliban terrorists in a prisoner exchange last year, is soon going to go on trial as a deserter. Of course, when Barack Obama secretly made the deal for Bergdahl's release - without consulting the military - there was absolutely no way he could have known this.

Only kidding! Everybody knew it! But Barry made the deal anyway because he mostly just wanted an excuse to put terrorists back on the battlefield, and also to show that he'd leave "no man in uniform behind" in the midst of his VA scandal.

Here are some samples of what Hope n' Change had to say at the time...

(Excerpt) the POW, Sgt. Bowe Bergdahl, may actually have been a military deserter at the time he was captured (or conscripted) by the enemy - and at the very least was a man who held a singularly low opinion of the United States even before his alleged capture.  According to Bergdahl, our nation is "the most conceited country in the world" and "I am ashamed to be an American. And the title of US soldier is just the lie of fools. I am sorry for everything. The horror that is America is disgusting.”

Sentiments which, of course, match those of his commander in chief - the Great Liberator of Guantanamo Bay. 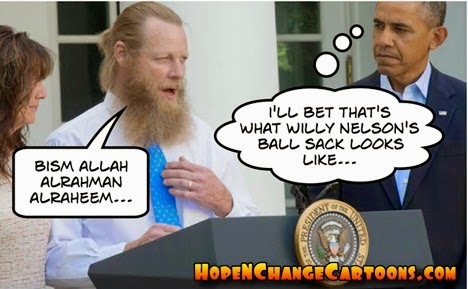 (Excerpt) Susan "I'll Say Anything" Rice made the rounds of news shows claiming that Sgt. Bergdahl served "with honor and distinction," which doesn't seem to quite square with the impression given by every other soldier who served with him. Then again, perhaps Ms. Rice has simply been misinformed by a Youtube video.

Meanwhile, James Clapper, then director of National Intelligence, said in 2012 that the "Gitmo Five" were unquestionably too dangerous to ever release...

(Excerpt) The White House is now asserting that anyone who voluntarily puts on the uniform of the United States has accomplished all that is necessary to be given the "served with honor and distinction" label to wear a lifetime, no matter what circumstances occur later.

And Hope n' Change can't help but wonder: will Nidal Hassan continue to rot in jail here in the United States, or will his service with "honor and distinction" allow him to be bundled with the Blind Sheikh, Khalid Shaikh Mohammed, and other jihadists for Barry's next prisoner swap?

Sorry, Stilt. I'm too busy choking back rage to be witty right now.

Arriving in Skanksville Jill felt honored that the memorial was named after her.

Stilton, speaking of good old Bowe. Googled and found this. If this doesn't raise your BP to dangerously high levels, nothing will.

From all directions, it is becoming more obvious who is pulling Gropey Joe's strings. The "fundamental change" promised in '07 is being fulfilled. How long will it be before Jilly and the Ho start wearing burkas? Granted Shillery would look better with one. For that matter so would Pelousi and Waters.

According to Bergdahl: "Our nation is the most conceited country in the world and I am ashamed to be an American. And the title of US soldier is just the lie of fools. I am sorry for everything. The horror that is America is disgusting.”

Sad that no one considered to ask, "If our country is so 'disgusting," why does the rest of the world want to come here?" The puny little traitor bastard should have been slapped 'long side the head, stripped of his rank and sent back to A-stan with the entire CNN crew who obviously feel the same way about the most generous country (ours) the world has ever produced. Even sadder (or should I say "outrageous") is that there are thousands os spoiled little shitheads like Bergdahl who feel the same way.

Spotted an interesting vanity plate yesterday, which made me wonder if 'Fuck Biden' could be rendered into Latin, compact enough to put on a vehicle license plate. Tried Google translate, but sadly the 'translation' was of little use.

American(and not so proud of it now) Cowboy said...

"The puny little traitor bastard should have been slapped 'long side the head, stripped of his rank and sent back to A-stan"

I would politely disagree. The puny little traitor should have been executed for deserting to the enemy during a time of war. That is one of the many reasons why his kind of crap goes on. There no no real consequences to his kind of action.

I'm with MMM above, the rage and bile within limits my ability to comment.

That being said, I do believe that Bowe Bergdahl should have been drawn and quartered.

What is still needed to stop a lot of this crap are a few specific drone strikes (or other due-process justice would be better) "right cheer" in the USA.

@Anonynous- Remember who is in power right now and be careful what you wish for.

@ MM: Don't believe that would pass muster here in VA. My thought is if there was a way in Latin to squeeze such on a license plate, and if there was someone classically schooled, that person would probably also be a conservative and thus get a small, private chuckle at the village idiot president's expense.

If the Democrats are good at anything it's at giving the bad guys exactly what they want, both foreign and domestic.

"The horror that is America is disgusting."

How awful that Obama sought to repatriate him when he already hated it here so much.

Just more examples of how Progressives seek to dilute or destroy everything great about America.

@ John: "Just more examples of how Progressives seek to dilute or destroy everything great about America."

Yup, Like Walter Duranty and the NYT telling the rest of the world the Holodomor was a figment of the imperialist, capitalist imagination.


Well, the POS Bergdahl did serve with "distinction". He is distinctly a POS.

On a slightly different topic, next time you hear Gropey Joe (or any other dip$#!t) say that Americans shouldn't own semi-automatic firearms, remind that idiot that the Groper just GAVE the Taliban 600,000 fully-automatic M4/M16 rifles. He can give to terrorists fully-automatic rifles, but he won't "allow" AMERICANS to have semi-automatic guns? Just keep pushing, Gropey Joe...

@Stilton- Thanks as always for diving into the archives of Hope n' Change to remind us how truly, truly horrible Obummer was (and still is).

The Willie Nelson ball sack 'toon was one of my all time favorites!

@TrickyRicky: Mine, too. In fact, I'd been thinking of the Willie cartoon lately as the recent craziness unfolded.

Makes one wonder, aside from being fairly and freely elected to public office as a non-leftist, just what DOES IT TAKE to be tried for treason in this here land of the once free? Asking for a friend and former POTUS...

for those who do not have access to the online WSJ a subscriber, a Mr. Bill Hestir, posted this in an Op-ed about our "incredible" village idiot president:


[C’mon Man, You Should Retire -with apologies to Jim Morrison]

Joe, you know that it would be untrue.
You know that I would be a liar
If I was to say to you,
Your disapproval could not get much higher.

The time for hesitation's through.
There's no time to wallow in the mire.
Stay on and you can only lose
Your presidency in a flaming pyre.

Go back to sunny Delaware
Eat ice cream by a roaring fire
No need to dwell on your legacy:
The Biden-Sanders-Pelosi quagmire.

Joe, you know that it would be untrue.
You know that I would be a liar
If I was to say to you,
Your disapproval could not get much higher.

@JustaJeepGuy, you'd think that Afghanistan would have provided Progressives with an excellent opportunity to demonstrate how well gun control works.

@Studebaker Hauk asks "...just what DOES IT TAKE to be tried for treason in this here land of the once free?"

I've often asked myself that very question, going back decades. I think that Rubicon was crossed over 50 years ago when they let Jane Fonda back in the country without legal consequence. By the time Obama was President, it was possible to be an officer in the US Army and shoot over 50 fellow soldiers and kill 13 without "treason" ever being mentioned.

Quite frankly I don't think it's possible to be tried for treason anymore.

Mrs. Econ & I were thankfully off-the-grid over the weekend on 9/11, so we were spared the opportunity to consume most of the mindless media of the day. But I did come across the comments made by former President Bush that just made me shake my head. I think Mark Steyn summed it up best:

Bush owed a debt to these men for acting while he was invisible. Yet his brief remarks barely mentioned those heroes, and none by name. Instead, he retreated to the lame tropes of the ruling class, and started yakking on about "nativism" and "religious bigotry" (ours, not the hijackers') in contrast to those admirable Americans who "reaffirm their welcome to immigrants and refugees". These are surely pitiful consolations for the Afghan debacle, and weirdly irrelevant to the heroes of Flight 93, who were rather deplorably unicultural - "white male frat jock yuppies". As for "welcoming immigrants", one might think that, even for as oblivious a ruling-class man as Bush, that would be in somewhat bad taste given what happened twenty years ago.

Does GOP squishy Bush sound any different here than the far left of the Democratic Party today? Listening to his pap makes Obama's inevitability seem all the more unexpected in hindsight.