With Thanksgiving preparations moving ahead at full speed, we originally intended to post this cartoon, wish you well, then run back out to the store. But...

Then we saw a piece of "journalism" so rank, so appalling, so ridiculously offensive that we have to comment on it...

Perhaps in the familial spirit of Thanksgiving, Newsweek just added tens of millions of American voters to the Manson family. In essence, they're saying if you're among the many who fell under Donald Trump's hypnotically lunatic influence, you'd probably be perfectly happy going on a murder spree if told to by the President (who, it's hinted, uses his comb over to hide a swastika on his forehead).

Seriously, we've seen some awful journalism in recent years, but linking Charles Manson and Donald Trump really deserves some sort of special recognition - and we don't mean the high-fives and free drinks the writer no doubt received after coming up with that godawful title.

But for now, let's get the bad taste of this story out of our mouths and replace it with whatever savory goodness awaits us on Thanksgiving Day.

And remember, if asked what you're thankful for this year, raise your glass high and say, "Not having Hillary as president!"

It will either get an appreciative laugh or guarantee that the rest of your Thanksgiving won't be boring. 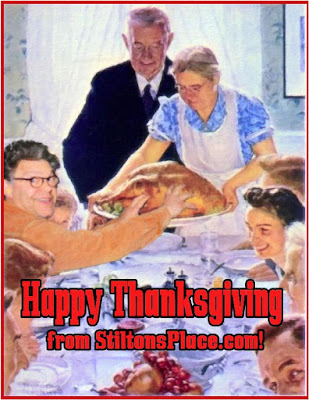 Why didn't they write about how Bill and Hillary friends and future witnesses all seem to meet their doom.

I have been celebrating Thanksgiving since November 8, 2016. I am thankful that the Trump base gets stronger and laughs at the MSM and their trying to out fart one another in disparaging President Trump. The guest that wouldn't leave is still about with excuse number 33 of why she did not win. Webb Hubbell's grandkids seem to be o.k. and man, am I enjoying the melt downs. Yea, much to be thankful for: my good health, the crook and Mr rapist bad health and boogie woogie O fading like a wilted (or jilted) flower and lastly maybe, just maybe some news on Uranium 1.
I just can hardly wait for Christmas!!

Most of the Turkeys will be committing suicide in the trunk of official cars, walking off the ledges of tall buildings and recycling blue dresses between now and Christmas. Don't get photo shopped fondling any breasts, be they Turkey, Duck or Flack Jacketed Chickie babes.
Have a well deserved Holiday.

Loved the turkey cartoon.
I stated on Thanksgiving last year that I was thankful Hillary lost and all I got was dirty looks.
Newsweek is a good candidate for any outhouses that are still left. Unbelievable!
Happy Thanksgiving everyone.

Wishing you a great one Doc to you and all yours......

"Hey, Hey you frinken kids!!! No Christmas music till AFTER Thanksgiving ....and get off my friken lawn"

This year I decided to go traditional for Thanksgiving and shoot my own turkey.
It's surprising how quick the service is when you walk through the frozen meat isle at Safeway with a loaded 30,06.

As for the noozeweak article, judging by the grammar, punctuation, and content, I can safely say that the writer is a 33 year old eight grader.

Now I'm going to try that recipe for drunk turkey.

We're in the middle of our kitchen renovation, so our Thanksgiving Dinner will probably be KFC or Popeyes or McD's or Wendy's or Panera or wherever. But it'll still be good, even it's tuna fish salad sandwiches.

Hope your Thanksgiving is as stuffed with thanks as mine. Keep well Stilt, mornings wouldn't be the same. Sam

I am sure both of Newsweek's subscribers were impressed with the article.

'News'weak has now gone below the standards of National Enquirer and Globe.

Both B.J. Clinton and Charles Manson never learned the meaning of "is".

Food for thought on this Thanksgiving...Every day is one for giving THANKS!

Snoozeweak comes through with another hard-hitting sleezefest...like the meme I saw a while ago, where a tranny was Woman of the Year, Bill Cosby was on trial for rape, and Donald T was the Repub candidate for president...it said we were all going to Hell in a Handbasket RIGHT NOW.
Well, Donald Trump is our President, in charge of exploding Libbie heads, so that's OK.
But The Enquirer is doing hard-hitting journalism and Snoozeweak is doing Alien Baby articles...now THAT'S a sure sign of the Zombie Apocalypse!
Happy Thanksgiving, everyone...as a member of the Nation's shuffling homeless, Thanksgiving and Christmas are our best time of the year with collective guilt forcing so much Turkey and clothing on our confused and overfed population that we need to actually diet after the Holidays!
Seriously...I wish a great family gathering on all who show up to one, and may the Christmas Season be about Jesus and lovingkindness where you live.

I myself will be celebrating killing the Hellenes and liberating the Holy Temple in Jerusalem, which entails eating foil-wrapped chocolate coins and spinning Dredels! Yes, Hannukah is such a ball of fun!

If you are a Hebraic Smurf, or a Jew, to all my Bluish and Jewish friends: Hag Sameach!

I'm just thankful that that utter rat bastiche and overall racist scumbag John Conyers seems to finally be getting his come-uppance.
No longer my reprehensitive, but hopefully the evidence that he was LITERALLY spending tax $$$ on hookers and blow will annoy his constituents enough to bounce him out of office. In a fit of jealous pique, if nothing else.

All I could think when I saw the Newsweak piece was "Want more Trump? Because this is how you get more Trump".

One of the biggest single mistakes that Hillary made last year was her "basket of deplorables" comment, which not only was one of the few times in her life when she was totally transparent in showing what she really thought and her contempt for everyone who was not "with her", but instantaneously insulted literally at least half the country. I was not a Trump supporter and had no intention of voting for Trump, but I took that statement personally. I have no doubt that millions of others who were not "with her" or "with him" felt the same. I also have no doubt that many of those not "with him" were after that arrogant slip.

So now Newsweak, clearly not having learned that lesson decides to double-down by equating Trump voters with Charles Manson. Good work, Newsweak! I haven't a clue as to who the Democrats are going to run in 2020, (especially considering that there may not be anyone left after the ongoing perv purge) but I have absolutely no doubt that Newsweak will be with whoever that is, and I'll have another reason to consider being "with him". Because I'm now a Manson fanatic, after all.

@ Pete: Is it me or have we, in Michigan, heard about Conyer's indiscretions for decades?

Whereas Hillary, by contrast, used Indian Sign and interpretive dance to communicate with her followers.

I'm thankful that I don't have ads in Newsweak. All 4 of their readers have already purchased shares in my ownership of the Brooklyn Bridge!

I'm Really thankful that Trump is our President and for the existence of twice weekly Stilton's Place articles.

Happy Thanksgiving, all! And, if you spot someone following Scummer's, er I mean Schumer's, directions on how to ruin Thanksgiving, exercise your freedom to withhold any of the fruits of your hospitality and throw their unappreciative carcass out in the cold.

When my wife and I went to visit our daughter a decade ago she offered to cook us some "chicken boobs" for dinner... I'd never heard them called that before, and I was glad no democraps were joining us because of the awkward situation that would have ensued.

Ding Ding Ding!! We have a winner Ladies & Gentlemen! Geoff King for comment of the thread! LOL

"Judi King said...
Newsweek is a good candidate for any outhouses that are still left. Unbelievable!"

Outhouses is right.
You would never be able to flush all that crap down your toilet.
Probably backup the whole sewer system for blocks on end.

No mention of Trump now. There is this retraction at the end of the article:

"An earlier version of this story did not meet Newsweek's editorial standards and has been revised accordingly."

They must have let that ex-Twitter employee post the original version.

@Readers- A lot of enjoyable comments above! And as Greg mentions (in the comment immediately above this), Newsweek has now pulled the references to Donald Trump out of their article. Ha!

So there's another little something we can be thankful for today! Here's hoping you all enjoy a wonderful Thanksgiving!