Takes A Licking, Keeps On Ticking 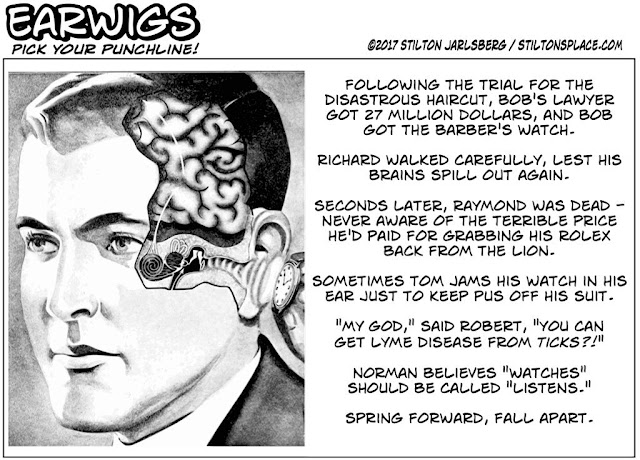 No dire reason for a lack of a more news-oriented post today, other than that we were juggling too many chainsaws this weekend. Which is apparently also true for the poor wretch in the cartoon above.

Among the distractions: a trip to the vet with Penny (the official dog of Hope n' Change) to try and track down some malady that had left her lethargic and off her food. It's a sad and scary thing to know that your furry family member has something wrong but can't communicate what it is.

Diagnostic results will come in sometime today, but we're glad to report that Penny's appetite and energy seem to have returned, and only moments ago she felt perky enough to shout feisty canine insults and challenges to an Amazon driver who dared come to our door to deliver a shower curtain. "We'll not be having any of THAT," wurfed Penny.

It's entirely possible that she just had an upset stomach from eating poop. Although that never seems to be a problem for politicians who, we believe, subsist on the stuff. 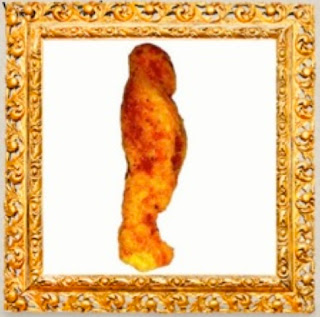 Some months ago, Frito-Lay had a contest in which people were supposed to submit pictures of actual Cheeto corn puffs which looked like something. Anything. The best specimen would win some wonderful prize which we can't actually remember, but would probably leave the winner with orange fingertips for a lifetime.

The picture above was Daughter Jarlsberg's entry and, to our eyes, a darned good one. What we have there is the mighty Bigfoot ("Sasquatch" in the language of Native Americans) standing tall, powerful chest puffed, and long arms hanging to his sides while he scans the horizon for predatory documentary makers from the Discovery Channel. Amazing, isn't it?!

The contest is long since over and, since Daughter Jarlsberg is none the richer for the experience, we think it's safe to say that the fix was in. We can't connect all the dots yet, but we're pretty sure the blame should eventually fall on Hillary Clinton.

Screw it ... Put it up on eBay, somebody'll give you a fiver for it. Just don't swallow it. They grow to full size when hydrated and eat you from the inside out...

Had I know This was casual Monday I damned sure would not have wrestled with the cummerbund for tux I usually wear to read these......

On the subject of eating poop: Politicians don't eat the poop. They feed it to us.

This just in but I doubt you'll hear it on MSM. Kermit is filling suit against Jim Henson's estate stating he endured years of Jim sticking his arm up his ass as a teen.

Poor Penny. I sympathize for her lack of communication skills. I have been trying to teach our doggie Angel (that's her name, but she sure ain't one), Morse Code. So far all she's been able to bark out is obscenities. And, every one of us gets molested by our politicians every day.

Hope Penny gets well soon. I thought PD was trying to tell me Timmy had fallen in the well with all the barking this morning, but now I guess he was upset about Penny not feeling well. But enough about important stuff. What's happening with the house?

And Elmo operator quit over molestation charges, skated as statute had run out.
http://baltimore.cbslocal.com/2014/06/20/voice-of-elmo-cleared-in-child-sexual-abuse-case-due-to-statute-of-limitations/

@Pete (Detroit)- Truth really is stranger than fiction, you simply can't make stuff like this up. That applies throughout our society.

The first great step to the man-machine singularity.

Glad Penny is feeling better. There are few more helpless feelings than that of dealing with a not-well pet who can't communicate in detail with you.

Cheeto cheaters: Blame it on the Russians. They've replaced "The dog ate my homework" as the universal excuse for everything.

"Besides repeated explanations from his doctor, Stuart still believes his Timex will cure his terrible migraines."

Leave it to an evil mega-corporation like Frito-Lay to screw he little guy (or gal)! I'll bet some nephew of the CEO won the contest, and is sitting on a beach in in Fiji sipping a Mai Tai as we speak. Makes me want to buy an AR-15 with a chainsaw bayonet.

@Anonymous and @Pete (Detroit)
Remember they had a muppet "Howard Handupme" also. Taunting the public with their misconduct!!111!!!

@Readers- I enjoyed all the comments above on what is admittedly a pretty superficial (though hopefully amusing) post today. For those who haven't noticed, one of the key differences between "Stilton's Place" and "Hope n' Change" is that I'm taking things a lot more casually now, including more personal stuff and outright silliness. Hope n' Change was about communicating an important message; Stilton's Place is about the importance of communicating with friends.

I'm glad to report that Penny is feeling 100% or close to it. No idea what the problem was - I'm just glad it's gone!

Per John D's inquiry, the physical work on the house is finished (except for touch-ups) but the place is still largely a mess because we got rid of our drapes, carpeting, and much of our furniture. Some of those furniture pieces held things that are currently sitting on the floor in boxes. And rather than just return old junk to hiding places, we're trying to sort and get rid of things. Mrs. J is great at it, while I stink. I open a box of knick-knacks to sort and almost immediately have an anxiety attack (wish I was kidding).

I seem to have a pathological inability to group like things together, because they don't seem like "like" things to me. For instance, there are at least 30 different kinds of annoying paperwork spread across my desk. And where should my stone gargoyles go? My stage lights and lasers? My collection of 3D glasses? Do wifi amplifiers belong with spare routers (and why am I keeping spare routers?) or with computer equipment? Should business software be on the same shelf as games? Plus, I still have stacks of my late parents' stuff to wade through, and smoke starts wafting from my ears as soon as I look at it.

SOooo it's going to be awhile before there's anything like a "new normal" around here, though I'm actually looking forward to repopulating the house with new furniture.

So happy about Penny. Love dogs.

So happy Penny is doing better. As a youngster I had a weinie dog named Penny. Cats are OK, but I just love dogs. My favorite New Yorker cartoon (I think it was that magazine) is where a gentleman is petting a dog and saying "good dog". The thought balloon from the dog says "why am I always just good, but never great?"

I think the fix was in on the cheeto contest. Daughter's is a sure winner.

RE: Earwig: "Sometimes open-mindedness can be a bad thing...."