Will you ever forget where you were and what you were doing the moment you found out that Joe Biden, alleged president of the United States, has Covid? Because I've already forgotten, no doubt because I filed the information in the ever-expanding drawer in my brain that's labeled "Who Gives A Crap."

Although that's not quite accurate with Kamala Harris lurking in the wings, only a heartbeat away from being the most idiotic dunce to ever hold high office. And in making that assessment, I'm including a lot of inbred royals over the centuries whose major accomplishments were developing hemophilia, growing webbed fingers and toes, having single-digit IQs and a thousand-yard stare, and farting in the bathtub and snapping at the bubbles while slapping their hands together and barking like a seal.

But by some madness, we may be only days away from Kamala Harris becoming President of the United States. Which raises the terrifying question of who she would choose as the new Vice President? After all, the Vice President's most important job is to make the actual President look less like a moron by comparison, and Kamala Harris was already on a list of only one who could fulfill that role for Joe "Where Am I?" Biden. So who or what could make Harris look good by comparison?

According to our inside sources, this is the short list of candidates being urgently vetted by Democrats... 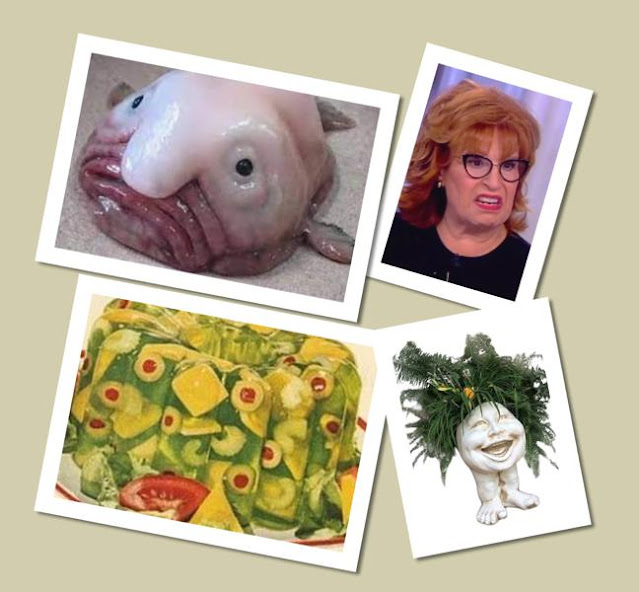 And so the nation holds its breath, waiting to see if Joe Biden will recover. Although doctors assure us that there's very little chance of Mr. Biden developing "long" Covid, as he can't possibly be long for this world whatever happens.

(Too Much) Food For Thought 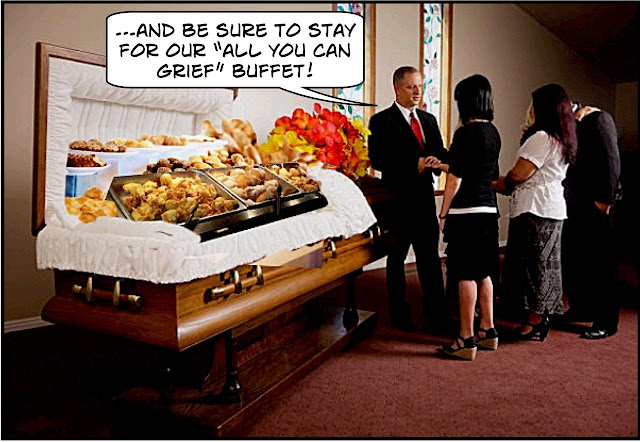 A routine visit to the doctor today confirmed what my pants were already telling me; my weight is way out of control. In the four months since I lost Kathy, I've gained 40 pounds. Apparently my metabolism is under the delusion that I can personally build a new Kathy out of 100 pounds of grease, sugar, and other carbohydrates and so far there have been no supply-chain issues to slow down the stockpiling of raw materials.

As people try to find coping mechanisms for extreme emotional stress, they frequently resort to the kind of vices that can give a quick (albeit fleeting) shot of relief to the brain. Drugs, gambling, alcohol, and sex are all high on the list and have few downsides other than having your teeth rot out, thugs beating the crap out of you in dark alleys, high-speed auto accidents, and contracting monkeypox from a hooker named "Candi" who, somewhat suspiciously, takes payment in bananas.

My personal vice has been food, which is less exciting than those other things but potentially just as deadly if I don't rein things in...and fast. I've been absorbing massive quantities of fried foods, Barbecue chips, entire pumpkin pies with Cool Whip, whole boxes of snack cakes, pints of ice cream, cans of french-fried onions, and so very much more. Not that I only rely on junk food - I also eat healthy things like hot dogs, sausage, tater tots, and pizza which, occasionally, has some flecks of vegetables on top.

And writing just the paragraphs above, I've eaten two large slices of red velvet cake, and have now switched to a bowl of cheese slices and oyster crackers. So I'm overdue to start cleaning up my ways.

According to my therapist, the only way I can actually start dieting again is by finding some other mechanism to relax or distract me during these times of tribulation. Writing seems like an obvious choice, but I've been very hard put to think of anything to write about (as you've likely noticed).

Happily, I recently had an idea for a silly little writing project which I'm putting into motion. This would be a humorous self-published book (and ebook), copiously illustrated by a guy I found on Fiverr, and probably only about 60 pages long. It will not be a great work of art or literature, but it will be an entertainment that I will sell dirt cheap (and likely give away free as an ebook, at least initially for the folks here).

I'd say more, but I've learned that it's a bad idea to share too much during the early enthusiastic stage of having a new idea; you use up your creative energy explaining the concept to others, and when they say "meh," it sucks the air out of your muse - who then takes up drugs, gambling, alcohol, and monkey-bumpin'.

But the project is something for me to work on which will hopefully kindle enough distraction and/or creative satisfaction to help me lay off the calories for the next few weeks. And if any of you have great weight loss tips (or hints about simian safe-sex) please leave them in the comments section! 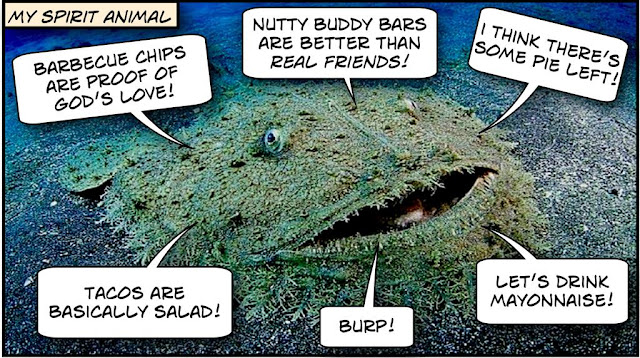 It Only Hurts When I Life 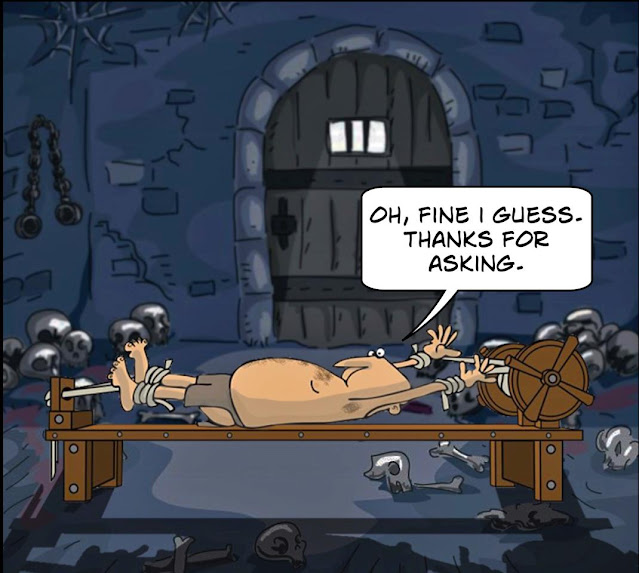 For the record, Daughter J said I shouldn't post the cartoon above because "it makes you look sad." To which I countered, "Yes, but it makes me look sad in a funny way." She still isn't buying it and you might not either, but I ran out of ideas and needed SOME picture to put at the top of the page.

It's been exactly four months since I lost Kathy and while I keep plugging along, I can't really boast of making progress in leaps and bounds. On my scorecard so far, I've had lunch with a friend once (with outdoor seating), dinner with Kathy's brother and his wife once (indoors and boldly unmasked), and this past week I actually watched a TV program by myself for the first time. So there's not a lot of carpe in my diem.

Still, Life, in its eternal wisdom, keeps me hopping with various tasks that need attention. Today, for instance, I had to have an audience with a judge to make a number of sworn statements relating to the disposition of Kathy's Will, which named me as the sole beneficiary and executor. After raising my right hand, I had to answer tough questions like these:

So that's been handled and will facilitate the generating of more legal paperwork which will be required to do things like changing names on titles and bank accounts. Because that's such a satisfying and uplifting use of my time and energy.

I've also noticed weird seepage coming out from under the toilet in the master bathroom and have decided that it's likely a bad wax ring where the biffy connects to the plumbing. Fortunately, replacement wax rings are only about five or ten bucks, meaning I should be able to get the toilet fixed for about $375 (plus about five to ten bucks) because I'M damn well not going to do it, no matter how easy Youtube thinks the job is.

Of a slightly more satisfying nature, I'm also doing daily bucket brigade duty to try to keep our various plants alive while North Texas bakes in 104° heat and weeks without a trace of rain. And trust me, "alive" is the low bar I'm setting for most of the plants just now, all of which are wilting, turning brown, and giving me dirty looks for not letting them come inside my air-conditioned house. Then again, that may have been the crew who mow my lawn - it's not like I'm going to stand out in that heat long enough to be sure.

Make Him An Offer He CAN Refuse

So today I got an unsolicited snail-mail letter from a realtor that went like this...

I understand you are the Personal Representative for the property at (my address). I specialize in the area of probate and helping administrators and executors like yourself with the sale of any real estate properties that the estate has to liquidate. I would like to meet with you, if possible, to look at the property and explain how I can help you in this process. Selling your property does not have to be a difficult process. I have been helping many people like yourself sell and get TOP DOLLAR.

It would, of course, be rude if I didn't respond. So here's what I sent back... 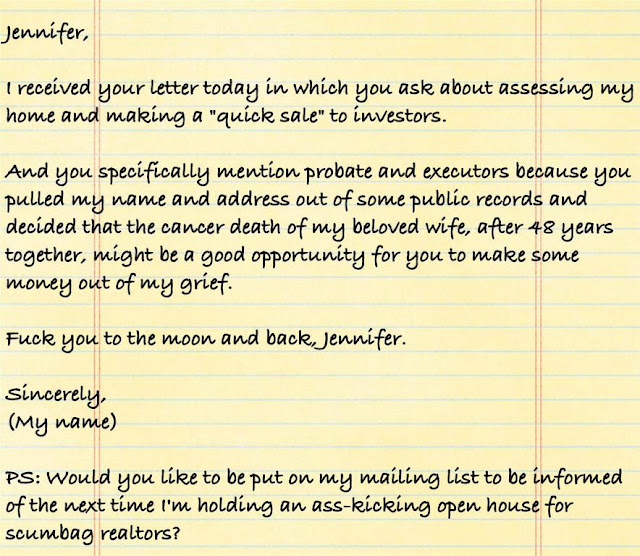 By the way, on her letterhead, she mentions being a graduate of Southern Methodist University. I'm no theological expert, but if Methodists are being taught to pick the bones of their neighbors then that frigging university needs an exorcism or something.

The piece above isn't to mock or laugh at the poor bastards who didn't know they were climbing into an air fryer at Joe Biden's invitation. Rather, it's just a comment on the deaths and suffering that will inevitably happen when this administration throws open the border and promises valuable gifts and prizes to anyone willing to risk their lives (as well as risking rape and violence) on a dangerous and illegal journey.
This blood is on the Biden administration's hands.
--------
Editorial Note: I still think it's okay to ship realtors across Texas in trucks.
Posted by Stilton Jarlsberg at 12:00 AM 54 comments: