The Truth in Cartooning Law requires me to disclose that I made this cartoon at a time when I genuinely needed a group hug and didn't have access to one. Although if a group had been here, by the time we'd have finished checking each other for infectious pustules the whole hugging mood would have passed.
Frankly, I've recently had a string of bad days, which is to be expected but isn't much fun. I need to be getting out and about and interacting with human beings, because the only thing that can partially fill the void in my life is More Life...but apparently, you have to go looking for that sort of thing rather than waiting for it to show up (unless the FBI thinks you've got a closet full of allegedly top secret documents). But being a real Olympic-class introvert, it's hard for me to get out there and interact with others.
One bright spot worth mentioning is that work on my writing project is going well. The project relies heavily on custom artwork and I've found an artist who knows how to draw "funny" and is great to work with. I get a fresh shipment of drawings every few days and they're reliably delightful. So I'm really looking forward to sharing it with you when it's ready.
And just to pad things out, here's a cartoon I put on Facebook recently...

And that's all I've got. I'll meet everyone in the comments section for my much-needed virtual group hug!
Posted by Stilton Jarlsberg at 12:00 AM 96 comments: 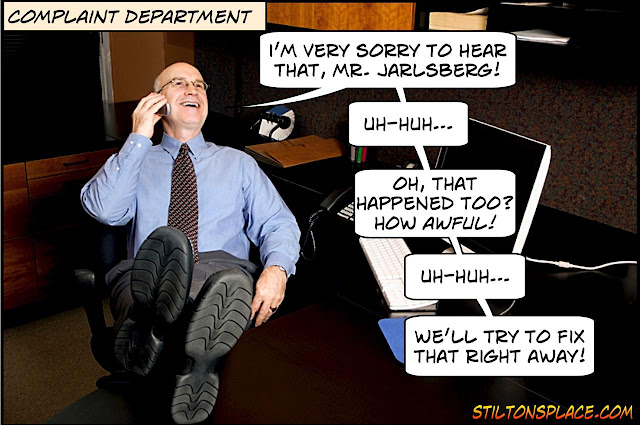 No, the title of today's post wasn't a typo. Rather, I don't really have much of anything to post to prove I'm still alive other than a number of gripes, so deportment demands that I try to do so amusingly. So here goes.

• I'm currently suffering from significant sciatica pain, which is amusing only because it reminds me that WC Fields used the term "suffering sciatica!" in his movie "Never Give A Sucker An Even Break." It feels like an ice pick in my lower back accompanied by painful numbness (something I wouldn't have thought possible) in my left leg, while my left foot feels like it's in freezing ice water. And this is on the same side as my bad hip, so I'm hobbling around like Long John Silver after a long night of drinking Clan MacGrog.

According to the Internet, there are a number of factors that could be responsible including being obese, not getting exercise, and sitting on your butt all day. So it seems like the proper treatment consists of applying heat regularly while simultaneously not being a fat, lazy slob. So I'm definitely going to be using a hot pack.

• Speaking of health, which is pretty much all old people do, I had to wear a heart monitor for a couple of weeks about a month ago and yesterday I was sent a cryptic report which my doctor will interpret for me on Thursday.  Apparently there's dilation in my "sinus of Valsalva," which is definitely a phrase you should imagine spoken in the voice of WC Fields.

I also have "Grade 1 left ventricular diastolic dysfunction" which Google tells me can potentially be fatal, although it also says that about everything from tapioca to hiccups. So I took comfort from another part of the Internet which mentioned that virtually 100% of people over 60 have the condition and neither they nor their doctors find it interesting. Okay!

• I tried to hire a home-cleaning service to help out around here. I'm doing a decent job of tidying, but am less good about cleaning the "infrastructure" as Kathy put it: showers, tubs, floors, countertops, etc. So not knowing how to hire anyone, I did what comes most naturally to me and tried to find a service that was cheap. I found a Groupon deal that would give me four hours of cleaning for about $100, bought it, then tried to schedule the appointment. It did not go well...

"I'm sorry, sir, but the Groupon coupon is only good for general housecleaning, not Deep Cleaning of the sort you're describing."
"What," I asked, "did I mention that pushed us into the realm of Deep Cleaning?"
"You said you wanted your windowsills dusted."

So that's not happening. I may try hiring a different service at some point or not. But for now, I guess I'll have to stop shitting on my windowsills. No, no, only kidding - although I did have an uncle who eventually kept his poop in dresser drawers, presumably because he couldn't afford a safe deposit box.

• In happier news (see, there's that "deportment" thing kicking in again) I actually received the $500 participation prize from the local blood bank and promptly put it in my KIVA.org account. A good friend introduced me to KIVA.org recently and I really like the concept. Using the service, you're able to give $25 micro-loans to people around the world for all kinds of good and interesting reasons. They pay the loan back over the course of six months or a year (with a default rate lower than college students, you can bet) at which point you can take your money out or just lend it again, getting compound Karmic interest.  I can now visit about a dozen countries where people owe me money, and if that doesn't make me a citizen of the world I don't know what would.

• Work continues on my writing project and my Fiverr artist continues to deliver delightful, funny illustrations that I hope to get in front of everyone in the coming months. This particular project helps me in a variety of ways, which will become clear when I'm free to talk about it more.

• Finally, I really DO try to avoid politics these days. But wasn't the FBI raid on Donald Trump's home the threatening kind of blatantly corrupt overreach that, in a purely hypothetical sense, might inspire dictionary-conscious citizens to show Washington DC what insurrection really means?

Okay, the cartoon above isn't that funny since it reminds us that the "vaccines" aren't, and that as miracle drugs go, Paxlovid is about as impressive as a birthday magician pulling a quarter from behind a 5-year-old's ear. Although in fairness, the magician once did that trick in the Oval Office and Joe Biden is still regularly checking his ears for more change.

Mostly, I'm just posting because it's been about a week since I put anything up and I want people to know that Daughter J and I are still chugging along, albeit without a lot of momentum yet. I think I've mentioned that I thought of a minor writing project to distract myself with, right? Well, I have - but the artist I've hired for the job has been out sick lately. Covid? I don't know that it is, but why in Heaven's name wouldn't it be? Anyway, when the project is completed you'll read about it here first - and you'll be able to get your own copy, probably free, at the same time.

I'm currently drinking huge quantities of water (sans Clan MacGregor) in order to hydrate for a possible blood donation on Monday. I say "possible" because so far I've only been able to produce blood once in four visits.  Seriously, the staff at the blood bank were high-fiving a turnip for giving more blood than me. Oh, I show up all pink, willing, and sloshy but my veins just skedaddle in the presence of needles or petulantly shut down after giving a single drop of blood. Which is frankly hard on me emotionally. I thought my grand purpose in life at this point would be to bleed extravagantly for those who need it and instead my role just seems to be to keep the chair warm for the next donor. But if at first you suck at bleeding, try, try again.

My weight loss program has been an abject failure to date although I haven't seen any increase in weight because I'm not stepping on a scale again except at gunpoint. It turns out that the funny thing about coping behaviors is that you need them to cope. But I'm working on healthier coping. In fact, I just got a book on living joyfully which was co-authored by the Dalai Lama and Desmond Tutu - and I've never seen a picture of either of them scarfing down a big bag of barbecue chips so I figure they have a lot of useful advice for me.

I also now own every conceivable book about Grief and Grieving, which sounds like the title of a really depressing Jane Austen novel. Which isn't the writing project I referred to earlier, but it's definitely going on my idea list.